Stop Knitting Your Own Noose 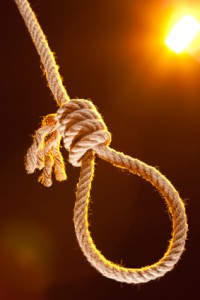 How would you classify your conscience?  Some posses a sensitive conscience which pierces them quickly and deeply each time they transgress.  Others among us have a dulled conscience which has been insulated through layers of unseen callouses, built up through years of willful sin.  There are also Christians who have the experience of the Holy Spirit’s conviction of wrongdoing while also having the confidence to know that the blood of Christ has fully paid for the act just committed; these Christians can move forward in simple trust that all has been provided for by their Savior and they need not linger in self-imposed guilt.  Then there is the other type of Christian – Christians like me – whose consciences experience immediate and penetrating conviction over sin which leads to quick confession and repentance...only for us, the sense of guilt seems to hover above us for much longer than our faith teaches us is reasonable. We possess what is commonly known as “condemning hearts”.  We don’t condemn others.  We condemn ourselves.

Guilt is a back-bending burden to bear.  It is amazing to me that we who hold to such sound theology concerning the thoroughness of Christ’s redemption can simultaneously hold on to such emotional and mental turmoil when it comes to allowing ourselves to actually live in the truth of our full forgiveness.  Last week I did something that I almost never do.  It grieved me then and, I’m sorry to say, I’m still grieved by it.  Alicia made an honest mistake that I had cautioned her about just minutes before and, when it came to pass exactly as I had warned her, I gave myself over fully to my frustration.  I didn’t yell at her – I didn’t have to.  My eyes hollered.  My jaw tightened. My calm words were spoken with a razor’s edge and I know for a fact that I deeply wounded my precious daughter.  I didn’t show her the grace and mercy that I crave for myself.  I was not a fit representation of the fatherhood of God to a very sensitive little lady.  In short, I sinned against her and Him.  God’s Spirit dealt with me swiftly and, after confessing my sin to Him, I went quickly to my daughter and explained to her my regret, detailed how I knew I had failed her, asked for her forgiveness and gave her the unqualified apology she was entitled to.  One week later I am still struggling with how I allowed myself to act so unloving to my child who merely made a mistake.  Something inside me searches for a way to absolve myself of what I did.  Maybe if I just think long enough on it I can find away to make it something other than what it was.  Maybe…I…me…if only…

Enter the enemy.  The stage is set.  Jeff knows he has sinned.  Jeff’s theology tells Him that there is nothing he can do and that he must turn it over to Christ.  The enemy cannot steal the effectiveness of God’s pardon but he now works diligently at resisting Jeff’s ability to rest in the gracious pardon.  A flaming arrow of guilt and condemnation is precisely aimed to stick in Jeff’s conscience and, after finding its mark, the arrow commences to a slow burn.  The enemy smiles and finds himself successful yet again at keeping a Christian from fully embracing the grace that the enemy despises.  “Guilt is good” is still Hell’s mantra.

How about you? Have you examined your life lately to discern if there is any residual guilt motivating you as you endeavor to live for the glory of God?  Maybe your failed marriage still haunts you and you see yourself with a scarlet D tacked to your chest.  It might be that abortion you had years ago that fills you with a surge of condemnation each time the word is mentioned.  Did you fail as a parent?  A son or daughter? A minister of the Gospel?  Perhaps you unintentionally damaged someone’s life through carelessness or selfishness…and now you are haunted regularly by a lingering sense of your own badness.  If your conscience is hyper-sensitive like my own, then you need the verse from 1st John mentioned above more than you might know.  You may have to militantly force yourself to break out of your emotions and discipline yourself to believe what God says.  The remedy to your sense of guiltiness is His stream of grace.  Guilt is only intended to be used by God to occasion our repentance.  Beyond that purpose, guilt is always the work of the enemy. ALWAYS.  The blood of Jesus not only has provided the means of your forgiveness from God, it has also provided the means by which you walk away from accusation by the enemy…or by your own tainted conscience.  You have a new identity housed within a new nature.  That identity is filled by redemption and there is not a millimeter of space available for lingering condemnation or illegitimate guilt.  John tells us that our hearts may struggle to fully embrace that but -have no fear! – God is greater than our fickle hearts.  He knows everything.  He sees and remembers that sin is not the rule in your life but, rather, the exception.  More importantly, He sees you fully sanctified in Christ, fully glorified in Christ and deals with you in a position of final perfection.  He is not waiting to see how you turn out – He has ordained that you will turn out in the fulness of His own Son!  He knows everything so stop knitting your own noose of guilt. It is not your emotional acceptance that affords you security in Christ…it is the fact that God has decreed you to be fully forgiven, eternally safeguarded, immune to condemnation and 100% secure in the nail-pierced hands of the Savior who declared “It is finished!”

Now fire that arrow right back at the enemy and go live your life today.