When Men Become The Greatest Of Fools 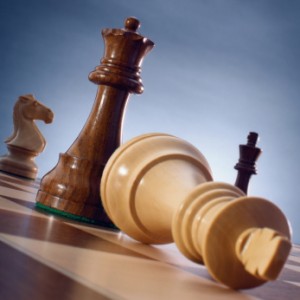 There are few things as inspiring as a godly man who lives in love, faith and loyalty to his King.  Something in my heart longs for a revival of valor, honor and nobility among the sons of God.  I’ve met a few of these men in my lifetime and I am unable to ever forget how God used them to cause me to hunger for deeper spiritual substance in my own heart and life.  This morning I am a little somber because the scales have tipped heavily in the other direction.  It is becoming a far more regular occurrence for me to become involved in the lives of men who have slain the potential of greatness on the altar of a pitiful idol.  This idol is Lust and it has never been as effective in the slaying of the sons of God as it is in our day.  Herod spoke words that all men need to heed when it comes to the power of lust:

Herod and his drunken cohorts had just watched his young, nubile stepdaughter perform a sensual dance that the bible says “pleased Herod”.  Not surprisingly, she was taught by her mother how to use her body to get what she wanted and it was highly effective that day, eventually costing Herod more than he anticipated.  For that matter, sexual lust still does this to men as it promises what it cannot deliver and plunders what it never forecasted.  Weakened by the intake of alcohol, Herod indulged his sexual urges and fed his eyes and mind with a banquet of images as his wife’s daughter danced.  Lust conceived in his heart and his immediate response was to yield himself in that moment to the extent that he would give away half his life – Whatever you ask, I will give you.  Imagine with me: he was so intoxicated with what he had seen that giving away his kingdom sounded reasonable to him.  We call him foolish for thinking that way but I say with great sadness that men are doing it still today.

Pornography becomes so important to a man that he sacrifices his wife and marriage on the altar of lust-addiction.  Another man finds success in his career and begins to feel a little cheated that he can’t share it with a woman younger and prettier than the one he married years ago; so he begins a secret pursuit of someone who catches his eye and rationalizes to himself that his wife still has his heart so it is acceptable that his mistress shares his body.  Strip clubs, magazines, Internet porn, adult channels streamed right into his living room, high priced escorts or street-corner prostitutes… in our world there is no shortage for men to conveniently indulge their delights.  For many, the last thing they taste is the deeply bitter burn of regret and shame.  They lose it all.

Then they come to me and other pastors when they wake up one day and their kingdom has crumbled.  Herod thought he could manage the amount of what it cost him – he decided he could part with half of his kingdom.  What he didn’t know is that lust is not open to negotiation – it stays hard at work until it claims the entire kingdom and sits upon the throne of a man’s life which could have otherwise been profitable.  The man who was once a royal ultimately proves to be the court jester…except nobody is laughing anymore.

Brothers, you are not so spiritual to no longer  be at risk.  As a matter of fact, the closer you draw to Christ, the more likely it is that the enemy will target you in this area.  Big ships need to be quickly sunk with proven torpedoes…and lust has an impressive history of effectiveness against men of God.  Don’t let the fact that you are now older cause you to drop your guard either.  I’ve spent enough time with men in their sixties and seventies to be made aware that lust isn’t an issue of the loins as much as it is an issue of the heart and mind.  Interestingly, a man in his mid-sixties told me that it gets worse as you get older because “everything begins to look good to an old man”.  Your culture is permanently fixed in such a mooring that sensuality will be hurled at you until the day of your departure.  Fight it when it rises within you – kill that desire at its first scent. Starve your eyes by turning away from any image that might begin that deceptive first step towards the crumbling of your kingdom.  Make yourself accountable to a brother in Christ who knows his own propensity to fail and ask him to help you.  Stop trying to manage your lust, doling out an acre of your kingdom at a time.  Christ has provided a means of escape and full victory;  it will be experienced through daily decisions, reliance upon Him and aid from other men who are honest enough to include themselves among those who acknowledge the reality of this temptation.

Brother, don’t lose your wife.  Don’t forfeit your kingdom.  Don’t trash your testimony. Don’t sell out your soul. With so many examples before you and such clear evidence that nobody has ever won with lust, please don’t become yet another fool among the greatest of fools.