Threatened By The Rival King 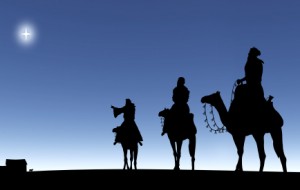 Not everyone is happy that Christ is being celebrated.  Every year the intolerance to His holy name grows more and more rigid.  Who would have believed that, in our lifetime, America would move to a clear position of hostility towards recognition of the birth of Jesus Christ?  We will celebrate the holidays…but not Jesus Christ. We will welcome a season of glee…but not one of glory.  We will think upon generosity and sentiment…but not upon grace and sacrifice.  By all means, fellow Americans, give gifts under the tree…but silence yourselves when it comes to giving hope under His name.  Lest we become alarmists and think that this phenomenon is unique, I leave a reminder with you from the earliest days of Christ’s earthly life:

“…behold, wise men from the east came to Jerusalem, saying, “Where is he who has been born king of the Jews? For we saw his star when it rose and have come to worship him.” When Herod the king heard this, he was troubled…” – Matthew 2:1-3 {ESV}

Herod was a propped-up, wicked king to the Jewish people in the first century.  The man was vile and violent, maniacal and murderous, deranged and dangerous.  When the group of star-gazers entered into Jerusalem, zealously inquiring of the newborn King of the Jews, the worst in Herod began to churn and bubble.  He knew what he was and he knew what he wasn’t; every insecurity he had formerly suppressed began to rise within him.  Reality was daring to intrude upon his fantasy.  He had worked hard at creating a kingdom over which he presided, and this news of a rival king shook him deeply.  Before too long he would give a decree to slaughter every Jewish baby boy in the territory that might have been born at the time indicated by the wise men.

He would do anything to keep his kingdom.  Those like him do the same today.

The reason why certain people wish to blot out the name of Jesus is due to the fact that they love to believe they are in complete rule and independent of Him.  When Jesus Christ is mentioned (as baby or as King) it serves to remind us all that we were made to bow rather than to rule.  His existence is an ongoing herald that we have one who reigns over us.  He has authority.  He has laws.  He has a throne at which every knee will bow in order that every tongue might confess His lordship.  Human nature never wishes to hear that news.  You might personally protest what I’m writing and say that you have no qualms at hearing His name, confessing His lordship and kneeling at His throne; my friend, that is only so because your human nature has been mastered by His divine nature and He has made you gloriously new.  Your inner-Herod has been dethroned and Christ welcomed to rule your heart instead.  To you, Jesus is no sentimental baby but the very essence of your life.  You have been made to know Him as Savior, as Master, as Shepherd, as Friend, as Sovereign and as King.  You have the heart of the Magi who were not satisfied to see only a twinkling hint of Him in the sky; you have hungered to draw near and worship Him. Yet the culture around you prefers a million little Herod’s above the awareness that there is only One before whom they must bow.  So they wish to kill Him today for the same reason that Herod wished Him dead two-thousand years ago.

Herod died a pitifully diseased man and embraced for eternity what he craved while one earth: independence from God.  He entered into his forever still seated upon his own throne which accompanied him into the abyss.  Christmas is not only a time of glee, grace and glory – it is a sobering time which, once again, divides humanity into two groups:

Those who forsake all to worship God’s Son…and those who will do anything to silence the intruding reality that there exists a rival king.