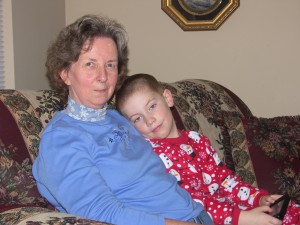 MaMa and her favorite little boy

In honor of my mother-in-law, who left this world for a better one on July 2nd this year, I’m posting her blog from one year ago yesterday.  Amy and i spoke last night of what a very wise woman Deborah Samples was and how our world could use a thousand more just like her.  Interestingly, her post is from the same passage that I plan to share this Christmas Eve at Meadow.  I hope you are blessed by her words.

“If He Had Not Come”

While reading through the Christmas story this morning from the Holy Scriptures, from Gabriel’s announcement to Zechariah concerning his son, John, to the Magi’s visit to the young Child, maybe around age two, our supposition being because of Herod’s seeking out all the baby boys who were two and under, I kept thinking of the words of a new song entitled If He Had Not Come. Amy is singing it at church today and maybe I can post that later. The words are wonderful and I am sure it will be sung beautifully.

We all are busy at Christmas time and look forward to this coming Saturday when we gather with family and enjoy the festivities and the food but if we miss why He came, then we have missed Christmas. If He had not come, there would be no salvation, our greatest need. Gabriel appeared to Mary and told her the name of the Holy Child that she would conceive and later to Joseph as he considered what to do with the news that his betrothed had told him. Hear what the angel said: “And she shall bring forth a Son, and thou shalt call His name JESUS: for He shall save His people from their sins.”  At the birth of his son, John, the priest, Zechariah, rejoices with these words concerning the Christ Child: “Blessed be the Lord God of Israel: for He hath visited and redeemed His people and hath raised up an horn of salvation for us in the house of His servant David:” In Luke1, the old man, Simeon, and the aged widow, Anna, had been waiting and now were rejoicing at the coming of the Redeemer. They knew their hopeless plight if He had not come. Simeon, after seeing and even holding the Savior, was ready to depart this stage of life. We don’t fear death either when we have seen and believed and know why He came, that is to rescue and redeem poor and hopeless people like you and like me.

If He had not come, there would be no Sunrise. Again, from the tongue of Zechariah: “Through the tender mercy of our God: whereby the Dayspring  from on high hath visited us, to give light to them that sit in darkness and in the shadow of death, to guide our feet into the way of peace.” Oh, how the night sky must have brightened that glorious night as the shepherds watched over their flocks when all of a sudden, the multitude of heavenly hosts appeared. The wise men followed the star which led them to the Child and they worshiped and rejoiced with “exceeding great joy.”  He is our Dayspring, our Day Star arising in our hearts.  The nights are dark and long at seasons in our lives but there is nothing quite like watching the sun rise in the morning. I saw a beautiful one just this morning , one filled with vibrant pink hues surrounding that fire ball and it was breath-taking as I considered the true Sonrise. If He had not come, we would still be grappling and groping around in the darkness but praise God, He has brought light to our hearts and to our lives.

If He had not come, there would be no Sympathizer. There is always, at least to me, a sense of sadness during this season because I realize that hospitals, cancer treatment centers, homeless shelters, and yes, even funeral homes don’t close their doors for the month of December. Just this morning, I prayed for those who suffer today, many I know and most I don’t. I have been there on the first Christmas that the chair that was usually occupied now is empty and there is an ache that is unexplainable. The best that another human can do, as well intentioned as they are and as appreciative as we are of their effort, is just not good enough. But I know One, the Great High Priest, Who, according to Heb. 4:15, sympathizes with your pain perfectly and comforts with a peace that is beyond comprehension. Precious hurting Brother or Sister, be encouraged that because He did come, the places I mentioned in line 2 of this paragraph and places like them are temporary. One day, because He did come, there will be no more use for these locales.

Dear Reader, if that paragraph is where you are today, firstly, know that the Body of Christ has not forgotten that some Christmases are hard and we lift up you and yours today but know even more so that there is One Who loves you beyond measure and will hold you and comfort you and sympathize with your pain today. Run to Him and climb up into His lap and lay your weary and confused head on His shoulder. He knows, He sees, He cares!

If He had not come, we would have no song. I love the carols that I have been listening to for weeks- some old and some new. They are all about Him and His arrival that night in a stable and His purpose for leaving the glories of Heaven and coming to a cruel and callous people. A favorite of all was written entitled Silent Night. I think it was because Peace had come to invade a noisy, clamorous world. O, Come, All Ye Faithful was penned and we still do just that- we come and adore Him every day for He is worthy! Yes, there is Joy to the World in the place of sorrow and futility. Because He came, He has traded for us “beauty for ashes, the “oil of joy for mourning, the garment of praise for the spirit of heaviness.” In 1893, a lady named Christina Rossetti wrote Love Came Down at Christmas. Yes, He did and pity you and pity me if He Had Not Come!

“Thanks be unto God for His unspeakable Gift.”