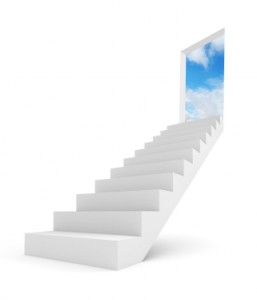 The messengers from Heaven had been dispatched for the purpose of announcing to the followers of Christ that something dramatic had occurred.  Of all places to be sent, the angels waited at a tomb for the beleaguered, devastated disciples to arrive.  When they finally appeared, it was not Peter the angels met.  John and James did not show face.  The other men wanted no part in a tomb-side vigil.  The women were the ones who came after the Sabbath was complete and they had brought their spices to rub upon the death shroud of Jesus.  The whole scene reeked of death, both physically in the presence of many tombs and emotionally as hope had been crushed days before at Golgotha.  There was no joy here as far as these devout women could see.  Then the message came,

Undoubtedly, these were the most monumental words ever uttered by one of God’s creations since the beginning of time.  A multitude of angels had announced the birth of Christ 33 years earlier, all angels were silent at His death, and now two angels were succinct with their words at His resurrection.  Jesus wass alive and they came to the wrong place if they were seeking His body.  The women likely went into sensory overload at the tomb as the Bible describes the angels as dazzling white which compelled these sisters to bow on their faces to the ground.  Their burial spices were no longer needed because death would never be the context in which they operated with Jesus.  Angelic words conveyed the puzzling truth that the Master that they had seen crucified could not be held by the chords of death.

Each Lord’s Day the saints continue to gather to rest in this perpetual hope that transcends time and space and matter.  We know that we are overcomers because the greatest foe that mankind faces has been conquered and we have been made partakers in that victory through trust in Christ.  Man continues to grow in intelligence, capability, perception and technology.  We can touch the bottom of the cosmos with rockets and satellites and telescopes.  We can solve medical mysteries and produce inventions that would have made primitive ancestors think we were gods.  Man beats his chest in pride and strings together eloquent words that might compel the casual listener to view us as invincible.  Yet, with all our prowess and intelligence, man has no answer for death.  It never asks permission of us when it chooses to pounce.  Death ambushes, robs and gives no explanation of its timing.  Death is impersonal and unaccommodating.  All know that death is inevitable and we spend countless energies, time and money to push that intrusive thought away from our minds.  Yet it still lingers and we can hear the second-hand of our life-clocks ticking.

Jesus stops the clock and replaces it with a calendar that has no end.

Those of you in Christ have been granted His victory.  Your body’s journey in this world will certainly come to a physical end one day.  Your own shroud will be laid low and others will weep at your end.  Yet we believe that the split second your eyes close in death here they will open anew in a realm yet untasted by you.  You will go where He is.  There is a place prepared for you so that, when time is no longer a factor, you will be with Him forever.  Because of this you are well able to live out your path today.  These battles of earth are temporary.  Pains and problems, toiling and tears, aches of agony are not worthy to be focused upon when we remember that the mouth of the grave hangs open in stunned silence as, in Jesus Christ, life trumps death.  We have won the battle against the great enemy.  We gather together each Sunday to get the tiniest glimpse of that reality when we sing His songs, read His book, tell His Gospel, release His praise and galvanize around His promises.  Though imperfect on a thousand levels, our worship gatherings point to a day when all who have bowed the knee to Jesus will be completely free, wholly perfected and lavishly granted entrance into the fullness of our faith.

I’m not one to wait until that occurs before I begin my own celebration.  It is so very real I can close my eyes and hear the anthemic songs amongst an innumerable multitude in paradise.  We are close.  Very close. Are you ready?