With my last few posts being focused on the cancer diagnosis I received a few weeks ago, I wanted to post something today with a little bit more of an encouraging vibe to it. Before doing so, let me say thank you to all of you who have ministered to me and my family as we square up against this disease. Treatment for me is scheduled to begin on Monday March 2nd and is supposed to last six weeks. By the way, I will not be dying. I might be struggling a little bit according to the normal impact that chemo and radiation produce in the human body, but I have not fully given myself over to that possibility either. I’m asking the Lord to shepherd me through the treatment in a way that brings Him great glory, and shows His sovereign authority over my body. He loves me and I trust Him. Thanks for keeping me lifted up in prayer. I feel the strength coming from the Family of God.

What I am encouraged and excited about is that I will finally be releasing my first book this coming Sunday February 23rd at . There will also be a simultaneous formal release on TransformingTruth.org at the same time, where you can get an electronic version of the book (PDF format) right there off of the website. After the release on the morning of the 23rd, later that same day, we will publish other avenues where you can conveniently buy the book if you are not able to be with us here that morning in . We will have about 450 copies on hand that morning in the front lobby at the church and it will be first-come, first-served. I am truly excited to get this book in people’s hands! 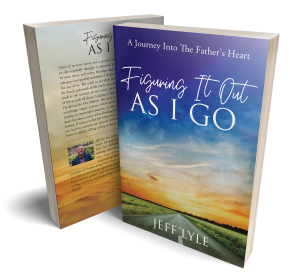 So…what is the book Figuring It Out As I Go all about?

God led me to write the story of my own life journey from a painful childhood, through an intensely rebellious decade that began at age fourteen and lasted until my conversion at age twenty-four. The title of the book capsulizes the reality that I felt for nearly all of my early years that I was somewhat alone, trying to make sense of the complexities of life as I lived it out day by day. In short, I was figuring it out was I went along. Frankly, I made a challenging beginning to my life into a massive mess because of poor choices and an intentional rejection of the God who pursued me in grace and love. The book reveals some very painful details of just how lost I was for that darkened decade. After receiving Christ at age twenty-four, I was still quite the maverick and did not conform well the norms of what was expected from Bible-belt Christianity, especially for young preachers. I asked questions, challenged traditions, and became determined to live by what the Bible said rather than what human religion dictated. Many chapters in the book reveal my struggles as a husband and father and how I had to figure out what being a family man is as I went along that part of the journey. Over the years, my personal conclusion and abiding conviction has become that every single one of us is figuring out life as we go. Very few people, if any at all, can honestly say that everything they pictured and planned about their lives unfolded just as they thought at the beginning. We have all experienced twists, turns, ambushes, upheavals, burdens and breakthroughs. My story is no different.

I will say that there are several accounts in my book that I have never shared publicly in any of the thousands of sermons I have preached. There is quite a bit of danger and drama revealed that just isn’t suited for Sunday sermons. While I intentionally withheld vast amounts of the dark details of my lost and wandering years, there is enough of that type of content in the book that should make the reader sit back and give God the glory for the astounding work He accomplished in rescuing both my physical life and my soul. I included the accounts of two near-death moments that I experienced prior to my salvation. I also share my darkest day as a borderline insane young man whose mind was being ruined by drugs. There is a detailed recounting of a demonic encounter I had when I was twenty-one years old that God used as a catalyst to begin to awaken me to the dangerous line I was walking. It’s not all bad stuff though! The second half of the book chronicles how I went from a good Baptist-boy to a Christian who experienced a stunning encounter with the Holy Spirit which revolutionized my walk with God and had left me marked ever since that moment. Many of you have been curious (or upset?) at how I made the transition from a Bible-only pastor to a Word & Spirit pastor. Well, you will never have to wonder again if you read this book because the whole journey is revealed therein. I even included in one chapter what I consider to be the most powerful encounter I have ever had with the Holy Spirit – an encounter that forever changed how I serve and lead people in the Kingdom. I believe there will be plenty more in this book to cause each of us to stop and ponder the ways, works and word of God. He is amazing. He does not mind at all us figuring things out as we go along with Him in the lead.

I hope you will be able to buy a copy of Figuring It Out As I Go beginning this Sunday. Again, you can come to in and get a copy, or you can check back on the Transforming Truth website around 10AM that same morning and purchase a copy online. Hopefully, by the middle of March, an audio version will be available on audible.com for those who might prefer to hear me read the book in my own voice rather than read it in paperback or electronic form. Please pray with me that many will be impacted by what I share in it. I wrote it as a book of gratitude from me to God, but I also want it to motivate all of you in your own journeys…as you continue to figure it out as you go.