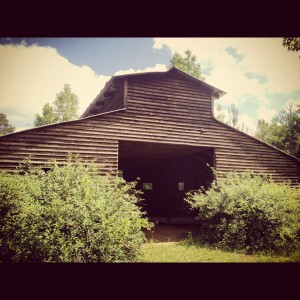 It was a strange place for a shiny newer-model minivan – a citified vehicle in the middle of the countryside.  Gravel popped out from beneath our slow moving tires as we crept down the long, narrow driveway surrounded on all sides by Georgia pines and thick brush.  Amy, the kids and I had been eager to see Uncle Mark & Aunt Charity’s new place in the sticks of Dawsonville and yesterday proved the perfect time for a family visit.  Though they don’t finalize the deal until the day after tomorrow, the home has become theirs already in heart and mind.  We got out of the van and were met by their two mammoth dogs, Buddy & Jedi, fresh (actually they were anything but fresh) out of the little creek, bursting with canine joy as they checked out the new homestead.  There is a good reason for them to be delighted – 11 acres of non-fenced terrain to mark as their own new stomping grounds.  The place was serene and quite taking to behold.  Dotting the tall-grassed field behind the house were some of the biggest anthills I’d ever seen.  Dragonflies and poison ivy, gnats and chirping birds, a neighbor’s dog sounding his alarm that outsiders had arrived…every one of my senses signaled that I wasn’t in the city anymore.

Mark (Amy’s brother) and his sweet wife, Charity, are easy-going people and Amy and I were so blessed to see them being availed an opportunity of a lifetime with this new home.  We thought the new place to be a perfect fit for them and rejoiced with the same excitement as if it had been our own.  Their home, the spread of land and, of all things, a horse stable which will likely remain vacant until one of them gets that equestrian itch…all of this came as a blessing from God after the previous year held plenty of sadness for Mark and Charity.  During the time with them, my three and Grandanny, I found myself so grateful for the reality that God is the divine coordinator of the seasons of our lives.  Not every chapter in your story is meant for sunshine and cool breezes.  God writes in some thunderstorms which shake you to your core.  Clouds roll in and the bottom drops out of the skies as you are forced to endure the periodic deluge of difficulty.  Each of us can rest assured that there is a sizable amount of trouble that we will encounter in this life – broken hearts, interrupted plans, shattered dreams and unanswerable questions  are going to find us at various times…and being a follower of Christ doesn’t immunize us from this.  Yet, we must never forget that this is not the way things will always be.  There is coming a final perfecting one day and beyond that point no pain can pass.  Let us also remember that you and I are also blessed with a fair amount of laughter and love in this life.  Not everyone around us is our applauding fan but we are certainly blessed with a handful of people in this journey who will stick by our side no matter what.  Amy’s daddy told her many years ago, “If you ever kill anybody, just call me and I’ll show up with a shovel” – now that’s what I call loyalty!  We should slow down today and really ponder the truth that, all things considered, we have it pretty good.  I’ve never gone hungry.  I’ve always been clothed.  There has never been a time when shelter was not available to me.  When sick I’ve had medical help available.  I have a set of parents who stuck by me when I played the fool for a decade.  My wife and I are happy in spite of our individual sin natures and resulting imperfections and conflicts.  I have a daughter who brings me joy and a son who inspires me to hope.  And then there is this…

I am forgiven. Yes, amazingly, I am saved.  I was chosen, pursued, awakened, convinced, empowered to express my need for forgiveness to the God who would hear my cry and, in the end, I was made His very own child.  Anyone who knew me in the misery of the early 1990’s would have believed me an unlikely candidate for redemption.  That glorious moment shared privately between the Creator and me on August 4th, 1994 is forever burned into my mind without callous or confusion.  Upon that 18-year-old hinge my own story swings.  This is the reason why I can brave the seasonal storms when they find me.  You see, I’ve been brought forth from abysmal death into inexplicable life and therefore have assurance that lesser storms will be brought to their own ends.  This is also your hope after you have been brought to faith in Christ.  You, friend, have been made an overcomer.

Being a mere observer of a new chapter for my brother and sister in law made me aware yet again that God is gracious to His kids.  Their new home in the country reminded me of some of the simplicity that life affords those who are looking for it.  God delights in second chances and new starts for His children so let us be happy for those around us who are blessed of Him.  Rejoice with them in their season of sunshine.  Take inventory of your own life today and mark every good thing for which He deserves praise.  If you find yourself under clouds and pelted with rain for another in a long succession of overcast days…engage faith.  You have it – now believe Him.  Seasons come and go while we live down below.  Take hope, yours is sure to come…maybe even today.