Words From The Elder Stateman

Wishing everyone a grand weekend as we prepare to enter Holy Week and celebrate the Resurrection of Jesus Christ on Sunday March 31st.  If you don’t have anywhere to worship please consider this my open invitation for you to join me at Meadow at 10 AM on Easter Sunday.  My dad sent this to me a few weeks ago and it’s a great read.  You can follow Doug Lyle on Twitter at @CDwildbillyle.  Thanks, dad! – Jeff

Jumping Off The Tight-Rope 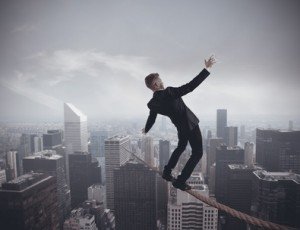 It happens almost every business day of the week.  Millions of people decide to buy and millions decide to sell.  On the NASDAQ alone, this happens 10 million times each day.  That’s a whole lot of fear and greed!  Fear is a powerful influence and motivator.  And every one of us has tasted it, personally and viscerally.  Maybe it was a bad health report.  It might have been one of those 500-point losses on the Dow.  Or maybe it’s the trillions in U.S. debt that threaten our futures.  Maybe it’s your own debt.

So….what do you fear?

Sometimes, it’s good to step back from life’s complexity and simplify things.  In the myriad of things we have to deal with each day, there really are only two states of mind that we can have – fear or its polar-opposite, faith. Let’s go back to the beginning – literally.  The book of Genesis, chapter 3, verses 6-10.  The setting is the Garden of Eden only moments before Adam makes his fateful decision regarding the fruit.  We pick up with Eve who is feeling just a little fear herself.  Not fear for her safety.  She fears that she might miss out on something.

Vs. 6. When the woman saw that the fruit of the tree was good for food and pleasing to the eye, and also desirable for gaining wisdom, she took some and ate it. She also gave some to her husband, who was with her, and he ate it.  7. Then the eyes of both of them were opened, and they realized they were naked; so they sewed fig leaves together and made coverings for themselves.

Vs. 8. Then the man and his wife heard the sound of the Lord God as he was walking in the garden in the cool of the day, and they hid from the Lord God among the trees of the garden.  9. But the Lord God called to the man, “Where are you?”

Now, fast-forward to the first century out on the shores of the Sea of Galilee as recorded in the book of Mark, chapter 4, verses 35-40 where we find Jesus speaking.

Vs. 35. That day when evening came, he said to his disciples, “Let us go over to the other side.”  36. Leaving the crowd behind, they took him along, just as he was, in the boat. There were also other boats with him.  37. A furious squall came up, and the waves broke over the boat, so that it was nearly swamped.  38. Jesus was in the stern, sleeping on a cushion. The disciples woke him and said to him, “Teacher, don’t you care if we drown?”

Vs. 39. He got up, rebuked the wind and said to the waves, “Quiet! Be still!” Then the wind died down and it was completely calm.

When Jesus asks this question about having faith, He implies that faith is the cure for their fear.  Faith and fear are on opposite ends of a person’s mental and emotional spectrum.  The question, of course, is from which end do you tend to operate.  That’s our pivotal question.

A number of years ago, I was talking to a bond trader about what kind of market scenario worked best for him.  I expected a fairly technical answer and was surprised when he said, “I don’t really care.  As long as there are greedy and fearful investors out there, I will always have plenty of business.”  It’s occurred to me more than once that there is someone else who feels exactly the same way.  It’s our arch-enemy, Satan.  And it’s our fear that drives up his balance sheet.  And it’s our faith that takes the wind out of his sails.  We have to decide which one it will be.  Adam and Eve didn’t lose or throw away their faith in God.  They just shifted it from Him to themselves.  Eve shifted her faith to her own reasoning and Adam…well, Adam seems to have chosen Eve over God.  And the result was the same for both of them.  Fear usurped faith’s rightful place in their lives so the only thing they knew to do was to hide.  That’s what fear does; it makes you want to hide.

Thousands of years later, not much has changed.  You and I are subject to fear-based living.  We fear job loss, financial trouble, marital stress, loss of control over our lives, illness just to name a few.  Maybe yours is something else.  Our fears make us hide just like Adam and Eve.  We hide behind our educations, our professional competency and accomplishments or maybe we hide behind anger or even humor so that no one gets too close.  We do it out of fear.  Life is sometimes complex but our challenge and privilege is quite simple.  Wherever we are fearful, we just need to shift back to the faith side of the spectrum with confidence in God’s commitment to make us what we ought to be and His promise to meet our needs.  You’ll know you’ve made it when you no longer think and act fearfully.

From the pages of Mark’s book, Jesus asks us, “Why are you so afraid?  Do you still have no faith?”  Intentionally move right now to the faith side of the spectrum specifically regarding what you fear.  That will send your enemy straight to the unemployment line.