Who Lied To You And Told You That You Were In Control? 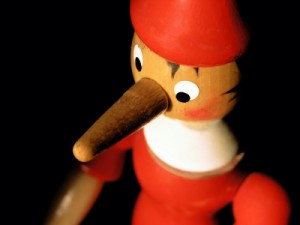 The thing that is bigger than you controls you.  You are aware that you are not the largest, strongest, prettiest, smartest, holiest, deepest, most lasting, most powerful or most successful.  Each of us bows to something and that thing becomes our inevitable master.  It shapes our ideas, anchors our values, motivates our decisions, orders our actions and eventually directs the entire course of our lives.  Let’s admit it: there is something which controls us and our journeys on earth are dominated by that primary influence of our thoughts and actions.  So what is the big thing that owns you?  I’m going to submit that there is one thing which may own you and produce peace and rest.  All other things, no matter what they are, carry with them an element of unhealthy fear and unfulfilled hearts as they serve as unworthy guides into our tomorrows.

Some people are driven by the fear of death.  They must be strong, fit, healthy and constantly busy so as not to let the spectre of their eventual demise enter into their minds.  Others are driven by the bigness of their sense of inadequacy – they live under the acid raincloud of the word enough.  Not good enough, pretty enough, wealthy enough, successful enough…the thought of being discovered as being “the lesser” motivates them to frenetic activity.  There is another group of people who live their lives in the fear of people.  They are constantly consumed by what others think or feel or say of them.  They sense deeply the need to be please others and never to disappoint them.  The identities of these folks is wrapped up in what others might conclude about them so they are exhaustingly living to ensure everyone is happy with them…they fear the frown of man.  In each of these scenarios there can be some visible, even admirable, results from living as such.  Accomplishments are gained, people are pleased, expectations are met and exceeded while approval is earned and granted.  Yet there is little substantive joy and peace in the heart because there is, in living this way, no sense of final rest and acceptance.  How do these people ever come to the sense that all is well?  Frankly, they never do…it’s always a promise for tomorrow.  The bigger thing that motivates them always cries for more and they are always threatened with the possibility of being outdueled by another.  Where then could they turn instead?  If these things I’ve mentioned are unfit to own their confidence, what is the alternative?  I find comfort in what the Psalmist said:

God is for me?  God…is…for…ME?  God is for me!!! His bigger thing is God.  He has bowed to God.  He’s owned by God.  His sufficiency is God.  His rest, hope, defense and justification are all found in God.  God’s word has become his anchor of soul because it is settled forever and will outlast heaven & earth.  God has spoken concerning his identity so he’s not scrounging around or racing about trying to locate who he is in something else bigger than himself but still smaller than God.  He’s able to praise God’s word because he has become convinced of the treasure of it.  He trusts God’s word and has chosen to ground his life upon it.  The inner result for the Psalmist? He declares that he will not live in fear.  No dread of not measuring up.  No angst of being tossed aside.  No worry of being cast off or spit out.  So great is his assurance that he asks a question that borders on a taunt or dare when he asks, “What can man do to me?”

His God is bigger than their gods.  Why on earth should he waste any time living in intimidation?  You see, friends, God is the only one is existence who, when you discover your assurance in Him, you find that He wants for you…not primarily from you.  All other things you might live for demand of you.  God promises to you…and fulfills those promises.  That other big thing you might live for plunders you, taking from you each day and taking each day from you.  God stands with grand paternal promise and commits to give and give and give…if you will only bow to Him.

Let’s lay aside the naive notion that you are not controlled by something.  Mankind loves to profess his autonomy but we can’t even weave our way through traffic without the permission of a mechanical green light suspended in the air which changes to red just as we approach the intersection.  We…are…not…in…control. Authority abounds everywhere even though we beat our chests and give our roars as we presume to be in charge of life.  Quite frankly, our next breath is a gift of divine permission so let us humble ourselves today and really ponder what is that big thing which sends us out and calls us in each day.  Rustle it up, think it through, mull it over and nail it down – what is driving you in life?

When you discover what it is, you will likely find yourself bowing because you have just met your master.  Make sure it’s a worthy one that speaks right well about this life and the one to follow.