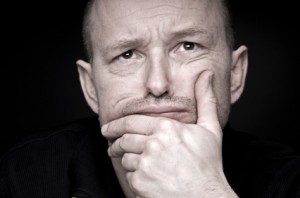 From about the age of fourteen to the age of twenty-four I was on a quest.  Looking for something solid to believe in, I spent those years dabbling in anything I thought might make my emptiness disappear only to conclude a thousand different times that my skills as a hunter for truth must be sorely lacking.  Nothing worked.  I found no answer. Somewhere in the process I gave up and defaulted to a narrower pursuit of pleasure, making that my sole aim.  Quite frankly, after a decade of debauchery I was exhausted and very sad, fearing what would happen if I ever died but holding even more loosely on any reason to continue living.  At my bottoming out, God moved decisively.  It was then that the Gospel message was made plain to me and my hearing became listening which ultimately resulted in my embracing of the long sought after relief for my empty soul.  Jesus Christ was not merely my answer.  He is the answer and my eyes had been opened.

Since those early days in 1994 I have earnestly desired that others would experience the same awakening that is still mine.  God’s Word reveals the answers that liberate us to know Him and this knowledge is our salvation.  To teach and preach the truth of scripture is something I enjoy on many levels and, primarily, my joy results from a constant expectancy that some who hear will be saved and/or further saved.  When one hears the truth of Jesus Christ and believes unto receiving it, he or she experiences great deliverance.  Along the way I have seen that there are two cardinal truths that people don’t always believe.  At the very least, we don’t always believe these two truths fully.  Within this battle to fully believe there nests most of our other struggles.  What are these two points of difficulty?

The first news is bad news.  God has declared in His Word that all humans are sinful to the core of our being.  We are wicked, evil, defiled, deceptive, unholy, self-serving, savage sinners.  Go back and read that last sentence and you will find something within you that rises up to protest the degree to which I have announced your guilt – yes that last sentence was about you!  It is simple for you to be able to acknowledge the token confession of your own imperfection but…wicked…evil…savage? C’mon, Jeff. The reason why we resist such extremes is because we usually view ourselves in comparison with other humans.  We are able to sign our own free pass to the condemnation of the degree of our depravity because we can always summons some clear data which finds others who are greater reprobates than we.  In the end we give lip service to our guilt but don’t have much sense of it.  For most this occurs because of an ignorance of the holiness of God.  We are lopsided in our theology and diminish the blazing perfection of God while, at the same time, we magnify our own righteousness to the point where we conclude that we are really not too far off the mark when it comes to meeting God’s standard.  We are not liars or thieves or murderers or gossips or adulterers.  We are somehow able to exonerate ourselves from these titles even though we do lie…we do steal…we do hate others…we do talk of others behind their backs and we do lust after others in our hearts.  We acknowledge that we have commited these sins but we refuse to fully embrace the titles which accompany the sins.  Me?  A liar?  Me? A thief?  Me? A gossip?  ME??? Do you see how reluctant we are to embrace the fulness of our guilt?  We think in terms of what we occasionally do rather than agreeing with what God says we are.  As full-blown depraved sinners…we sin.

The second aspect of our struggle to believe is for those of you who have faith in Jesus Christ as the One who has provided your forgiveness.  There has been a moment in your life when you knew enough of your sin to sense your guilt and you were also graced to understand that Christ is willing and able to provide your full forgiveness.  On some level you concluded that His sinless life was sufficient to serve as the substitute for your sinful life.  His blood was shed as the payment for your own guilt and this blood satisfied the holy demand of God’s law and removed His wrath from you.  Jesus Christ was both buried and subsequently raised from the dead, thus evidencing that His work was perfectly accepted by God and completed in its effectiveness to fully justify you.  You have been declared NOT GUILTY.  You are fully forgiven and comprehensively accepted by the very same God against whom all your sin is committed.  This transaction is both judicial and personal.  Most people who struggle with walking fully with joyful ease and liberty as Christians do so because they do not comprehend the judicial aspect of their forgiveness.  Just as we struggle to define ourselves as fully guilty and wrath-deserving sinners, we can experience reluctance at declaring ourselves fully pardoned and completely redeemed children of God.  Eggshells crack under our steps when we approach God.  We fear that our latest failure has moved us a little closer to Him retracting His declaration that we belong to Him.  We bag-up bundles of our good works and then unpack them in His presence before feeling secure in His acceptance.  We do and do and do and do…soothing our guilty consciences in order to gain assurance that we are nestled safely in His welcoming embrace.  There is such hesitation in us to accept the degree to which Christ has made us holy, approved, righteous and beloved before God.  We just can’t always comprehend how finished it really is.  To the same degree that you were separated and condemned of God before you came to Christ you are now accepted and cherished.  Because of what Jesus accomplished there is literally nothing left undone.  Our redemption is full…it cannot be made more so.  Our justification is final…it cannot be undermined nor amplified.  Our salvation is comprehensive…nobody can take us from the Father’s hand.  You can stop scurrying, worrying and hurrying in an unnecessary attempt to shore up what might be lacking in you.  Christ eradicated the very thing which condemned you.  It is now nonexistent.  Rest in His legal decree that you are completely pardoned from your crimes against God.  There is no further payment required- you really are completely acceptable to God in Christ.  Can you believe today that, in Christ alone, you are presently forgiven, beloved, redeemed, welcomed and acceptable to the God of the universe?  Will you believe this? If not, then what is it that you do believe as an alternative?

I hope that you will ponder these two essential Gospel truths today and in time to come.  (By the way, I’m preaching on this very topic tonight at Meadow at 7:15 PM)  Without your firm conclusions in both of these areas, you will either be outside of salvation or uncomfortable and uncertain within it.  Jesus Christ went to immeasurable lengths to offer us a restored standing with God.  Those same efforts that He exerted were also meant to ensure that those who believe could live their days upon earth in legitimate peace of soul.  To come up short on either of these things He offers may very well be the greatest tragedy a person could experience.  You don’t have to miss either.  He is willing to receive and to assure you today.