Yesterday brought me the news that my former pastor has been diagnosed with cancer.  Years ago, Jack Lawson went way out on a thin limb for me when reason might have told him to instead hug the trunk.  In 1997 Pastor Lawson invited me to join his small staff at Meadow to serve as the director of evangelism.  I had no clue back then about what a servant of God was and I was more than thrilled to leave my secular job to begin vocational ministry.  He is a gentle soul, full of patience and had pastoral skills then that I have not nearly approached now in the nearly ten years that I’ve served in his former office at Meadow.  He’s going to be the subject of my prayers as he and his wife, Renee, were quick to let my family know that they would be praying for us during my own family’s recent challenges.  When I got the news of his cancer diagnosis I felt something inside me stirring and I woke up thinking today about my own race.  I believe Jack is close to 74 years old, I’m 41.  He has been saved since April, 1969; I was delivered August, 1994.  He has nearly 40 years of proclaiming God’s word while I am soon to begin my seventeenth year.  Thinking on these things, Paul’s simple counsel motivates my heart today when I read: 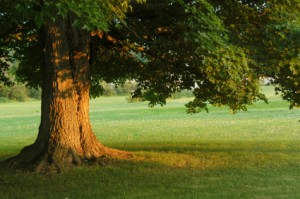 Why remain an ongoing acorn when God offers you this?

“And say to Archippus, “See that you fulfill the ministry that you have received in the Lord.” – Colossians 4:17

The longer I walk with the Lord the more impressed I am with the people who posses longevity.  It is not difficult to start well for Jesus Christ; countless men and women do so.  What I am learning is that many do not finish better than they started.  In fact, I have watched more people quit their ministries in recent years than I’ve ever seen before.  My generation will likely intensify this trend as we are well-known to be the firstfruits of the culture of the 1970’s and 1980’s wherein we were trained in the art of selfishness.  Some people fail to endure in ministry because, undoubtedly, it is extremely difficult work if you are doing it well.  Others do not fulfill their call to the end because it loses its excitement or the results drop off.  Misunderstandings, personality conflicts, moral failure and a host of other pitfalls line the pathway of progress…so many turn around or sit down.  I cannot bear the thought of not finishing what God has given me to do but, quite honestly, the potential for that is in us all.

Paul finished well and his writings almost never leave us with the thought of him thinking about quitting. Second Corinthians 1:8 might hint that there were times when he wished to die but I’m quite certain that Paul did not allow forfeiture of his work to be an option.  I personally know a great woman of God who has taught the same class for over forty years.  She’s outlasted seven pastors, a few dozen worship leaders and deacons, and thousands of church members who have come and gone.  I saw her sitting in the sanctuary last Sunday worshiping with us before she went downstairs to teach her first and second graders as she does every single Sunday.  I need more of what God has placed in her…rather, I need to better use it because He has already placed it in each of us too.

Keep pressing on, saints.  If you’ve been pondering the fine art of turning back, I encourage you to let it go for a day.  Instead think about God’s call for you to endure hardness as a soldier of Christ (2 Timothy 2:3).  For those who choose steadfastness, what seems unbearable in today’s moment will be nothing in time to come.  you can master what tempts you to flee for more easily-breathed air.  Paul declared to Timothy that he endured everything that he endured for the sake of others (2 Timothy 2:10).  Put it out of your head that it is supposed to be seamless, fluid and easy.  Believe rather that your ministry is to be enduring, holy and proven.  Long lengths of time will allow that to occur but exiting on the next ministerial overpass will not.  Uprooting and replanting yourself only allows for tiny buds to appear and then die each time you up and move.  My own hope is that God leaves me at Meadow until I vacate earth.  In the end, He’s the Gardener so it’s not my final decision.  I’m just a one man planted to bear some fruit.

Who wants to be a perpetual acorn? I reckon I’ll just grow where I’m planted.