Last week my son and daughter went with a group to a local wildlife ranch.  Deer, mountain lions, beavers, peacocks and a host of assorted critters were there in close proximity to my 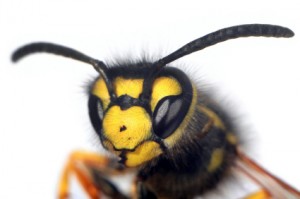 children.  Landon found out the hard ways that there were also some bees.  Yep, my lil’ fella took a stinger on the finger after he, admittedly, stirred one up by swatting at it.  He lost the battle but won the war as the bee, after depositing its stinger in my boy,  left earth for that great hive in the sky.  Not wanting to be outdone by my son, I’d like to stir up a nest of my own out there today.

When it comes to God, how sovereign is sovereign? In pastoral ministry I’ve run into three main groupings in which people seem to fall.  Here they are:

1.  God is absolutely in control of everything and there is no detail in which He is not sovereignly ruling in an ordaining, initiating and completing capacity.

2.  God is sovereign in that He has begun all things and will consummate them in the end, but has now fully withdrawn, leaving the present ins and outs of life on earth to mankind.

3.  God is sovereign in all things but is only occasionally involved in a direct capacity, choosing at times to personally  involve Himself in the affairs of mankind.

Now, whether or not you are formally trained in theology, you likely have some inclination to a certain train of thought about this issue.  Is God in absolute control when a Norwegian murderer kills above 90 people?  Is God sovereign over the child with cancer?  Is He merely in control when there is a miraculous healing, an endowment of money during crisis or an amazing delivery during an accident? What are your thoughts on this?  Any good Calvinist who regularly reads my words or hears me preach would politely tell you that I would make a lousy Calvinist.  Those who are not reformed in their thinking have sometimes been afraid of my commitment to the doctrines revolving around the sovereignty of God, feeling that I’m a closet Presbyterian more so than a hyper-evangelistic Baptist (as if you had only those two choices available).  I’ve never been a good fit in either camp but there is one thing I will say with no retreat:  If God is not in control of everything then someone or something greater than Him must exist in the universe or beyond which is in control of the things which He does not control.  That’s a scary thought.  No, that’s heresy.

Believing the bees’ nest to be sufficiently stirred…what is your thought on the matter? Let us act like grown-up’s as we dialogue please 🙂