On The Other Side Of Your Walls 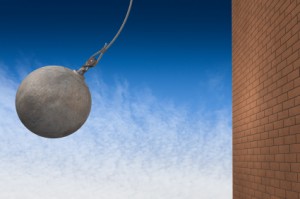 If you ever want to witness God forcing a man to change his views in a very short period of time, read several times over the account of Peter, the Gentiles and his Jewish brethren in Acts 10:1 – 11:18.  The merciful, gracious, tender and compassionate God of the universe threw out in one fell swoop some of Peter’s most strongly held traditions and booted him fully out of the nest of orthodox Judaism and into the broad expanse of liberated Christianity.  It is clear that Peter was not altogether at peace about what God was doing yet God made no apologies to Peter for making him feel awkward as He thrust change upon His servant.  God was shaking things up.  There were souls on the line.

“If then God gave the same gift to them as He gave to us when we believed in the Lord Jesus Christ, who was I that I could stand in God’s way?” – Peter’s words in Acts 11:17

Let me give you a crash course in Peter’s dilemma:  Peter, a saved, orthodox Jew, had been given a vision in which God showed him that what he had always believed about separating from unclean Gentiles was now to be done away with.  Peter struggled and even debated with the Lord as he received this vision which contradicted some of his most strongly held religious traditions (Acts 10:14-16).  God continued to move the reluctant apostle forward when he sent a contingent of Gentiles to the place Peter was staying.  Peter had never before spent time with Gentiles; his culture said it was wrong, his religious scruples made him overly hesitant to company with these types of folks and his conscience deeply struggled with letting go of lifelong traditions in order to obey what His God was clearly leading him to do.  Eventually Peter relented and went with the group of men to meet their leader, Cornelius, whom God had determined to save.  In a strange scene which emphasizes the sovereignty of God in salvation, Cornelius and all who accompanied him were justified through faith in Jesus Christ and dramatically received the Holy Spirit as Heaven’s evidence that they now belonged to God.  Peter and his Jewish friends were stunned bystanders as they realized that God had, in that moment, placed no distinction between Jew and Gentile and had forever united them all to be one in Christ.  Now here is where things get interesting.

Peter heads back to Jerusalem, the Hebrew epicenter of Christianity’s explosion upon the scene, and finds some highly agitated peers.  Word was out that Peter had broken protocol by hanging with Cornelius’ crew, breaking bread with them and having the audacity to cast the pearls of the Gospel before the swine of those sweaty Gentile heathens. Peter knew that he had crossed a line that his closest associates did not understand as they had no vision of their own from God concerning this new aspect to the Kingdom.  Peter had been truly led by God into some uncharted territory while he himself did not exactly feel comfortable with the process.  His mind was blown as Gentiles had experienced the same salvation and power of Pentecost that the Jewish believers had been graced with.  Peter had no nice, neat, tidy answers for his disturbed Jewish friends who were upset that their exclusivity in God’s plan was apparently to be no more.  Eyes narrowed upon him, arms folded across chests, frustration hung thick in the room as they demanded that Peter give an answer for what he had done.  Paraphrasing and condensing Peter’s response, here’s the gist of what he said, “Guys, what was I supposed to do? God is more liberal with His grace than we ever thought and it’s obvious that He wants the testimony of Christ to reach every people group.  He gave them the Holy Spirit and the evidence is clear.  These Gentiles are our brothers and we probably need to get used to it.  Who am I to try and stand in the way of God?! This thing is going to be bigger than we ever thought.”

Friends, there are some people that God has chosen to save whom you disagree with.  There are some Christians with whom you have sharp conflict as regards the way they worship, what they prioritize in the Kingdom, how they view prophetic future-events and what they portray in their public testimony for Christ.  We are fairly adept and building walls with no doors to keep them out and away from us as we give in to the temptation to take smug satisfaction in our personal spiritual slant on God’s ways.  You and I cannot even count the number of denominations which exist as evidence of our inability to agree on Kingdom essentials.  I’ve been guilty too many times to count of making nationally renown pastors who frustrate the fire out of me to serve as negative examples in my public sermons (I’m reaaaaallly trying not to do this anymore).  We have the tendency to narrow the body of Christ down to a particular pedigree and documented breed of Christian…and it happens to be those with whom we share pedigree and similar documentation.  This is not a political statement but, rather, a theological one: God is more liberal than you think. His acceptance is far less conditional than ours.  He’s more accommodating than us and welcomes outsiders with greater quickness and joy than we ever do.  He has never squeezed into man’s 3X3 box of religion so that we can conveniently tote Him about with us.  He rocked Peter’s world that day in Joppa and then preceded to further agitate the system when He saved Saul of Tarsus, the most Jewish man of his day and a former terrorist against Christians, and ordained him to spend his entire life proclaiming deliverance through Christ to the despised Gentiles.  Here’s a thought worthy of our attention:  if God was as narrow-minded as Peter then Gentiles never would have heard the good news of Jesus Christ and most of us never would have been saved.  Yes, the Church is comprised primarily of Gentiles who bowed their hearts to the Jewish Savior after hearing the gospel of grace from words penned by Jewish writers and preserved as God’s word.  Peter was forced out his comfort zone and God started something that afternoon which culminated in your ability to hear His saving truth and believe unto eternal life.

So, I wonder, what is He motivating you to do which draws you out from your insulated coziness?  What is the immense heart of God designing through your life that is forcing you to change?  What worn out views have too-long served as unprofitable, dead-weight anchors holding you back from the fullness of God’s purpose through your life?  Who is on the other side of your thick (and unnecessary) walls?  What will God need to do in order to remove that barrier in your heart which serves to keep at a distance those with whom He has made you one?

There may be liberties from God and leadership by God that you are reluctant to embrace.  Be careful.  Be discerning.  Be obedient. On the other end of your response there may be a work of God that you’ve never imagined.