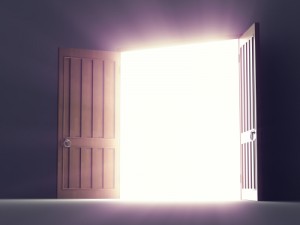 Occasionally it’s good for us to simply believe that God really does delight in pouring out blessing upon us.  Many of you are like me in that you have to work diligently at believing that your good God would choose you as the object of His favor; we are skilled at acknowledging all of His wonderful character attributes but somehow have a default mindset that this goodness of His may be heading straight toward us but, just before it splashes upon us, it makes a sharp left turn toward Albuquerque.  I’m learning in these days that God intends for me to grow up in this area and to start expecting all of my theology about His gracious, merciful, generous, patient, forgiving and wise ways to occasionally hit me right where I live.  He reminded me yesterday that He loves to bless me when I commit the blessing to His glory.

“‘I know your works. Behold, I have set before you an open door, which no one is able to shut. I know that you have but little power, and yet you have kept my word and have not denied my name.” – Revelation 3:8 {ESV}

For the first seven years of my pastoral ministry God proved the open door principle to me regularly.  This is not a boast because I was merely walking through the doors He opened but I will say that He allowed the vast majority of what I put my hand upon to succeed in those years.  The open door in front of me was the norm and I walked through countless ones that God blessed me with as I served Him and the flock at Meadow.  It is likely that I developed some presumption in those days because there was rarely anything that inhibited my “progress” as I sought to follow Him.  Then things changed and my Midas touch was replaced with a manure touch as God began to entrust me with toil, resistance, long periods of seeming denial, painfully slow motion and plenty of those pesky little human beings to share with me in detail all that I was doing wrong.  The open doors became bolted doors and God allowed me to be deepened on the undesirable side of shelved opportunity.  It was time to learn if I could be joyfully content when the Master kept saying No.  There is occasion right here for me to digress and tell you all that I’m learning in the process of God stretching my faith with long pauses between significant open doors but why I’m actually writing today is to share one that He opened this week – yesterday, in fact.  One opened door that gently reminded me that He delights to ambush us with an occasional dose of lavish outpouring.

It started when I saw a road sign as my family was driving through Tennessee on vacation.  The text advertised a Christian broadcasting station and it lodged in my brain and several miles down the road when we stopped to eat I sent myself an email with the call letters of the station.  When I returned home I followed up and sent one email to the station to see if they had available air time for the Transforming Truth Hour which currently broadcasts only here in Georgia.  The station manager promptly responded with available air time and quickly added that, due to the slow economy, he was eager to sell this slot at a greatly reduced price.  I made a phone call to Nick Bell, TT’s video editor in Texas, and went over the scenario with him.  He indicated that he had been praying about finding a means to earn some extra income as he is pursuing a full time commitment to video and web work so he welcomed the extra editing opportunity that comes with a new broadcasting partnership.  Then came the hard part: money.  TT operates on a shoestring budget and it sometimes baffles me how we get things done financially.  The answer is, simply, God supplies where He leads and I’ve certainly learned that truth on the backside of many a closed door in my journey.  My second phone call was to a dear friend who was saved four years ago while listening to one of the TT sermons on the Internet.  He told me earlier in the year to call him if there was a project needing financial backing and I hesitatingly made the phone call yesterday.  This project needed 100% outside funding and he was my first call to see what God might have prepared for this opportunity.  Was this an open door for furtherance of the Gospel of Jesus Christ?  Would it be another closed door outside of which I would need to learn again to remain content and give Him the praise? In short, was this possibility of broadcasting with a new station coming from God or not?

After one email and two phone calls the door swung open with such undeniable clarity that I sat stunned for a bit after hanging up the phone.  My friend said that he and his wife would send the funds for a full year of broadcasting in this new venture.  Door opened. God smiling.  Jeff humbled…and somewhere in Tennessee, Kentucky, Virginia and North Carolina, which are all part of our new broadcast coverage area, there are hearts being prepared for God’s truth being sent to them over the air waves and into the televisions in their living rooms.  Quite frankly, it happened so quickly and fluidly that I feel like a spectator to the whole thing.  The hinges didn’t even creak.

In closing today I can only encourage you that God is good to us whether the doors are currently opening or not.  His character and plan for you involves both types of doors and He reserves the sovereign right to give you seven years of successive open doors that seem like a glorious corridor to you.  He also has the wisdom and authority to put you in a waiting room for three years or more where you might be tempted to think He has forgotten you.  Our test is found in whether or not we still esteem Him worthy of praise.  Will we deepen at those closed doors or dissipate?  Will we believe or burst?  Will we wait or weary ourselves?  I am learning that, no matter the status of the door in front of me, He wants me to learn to live with the wisdom to not desire to have all that I want but to want all that I have. Don’t spend your time waiting on the open door.  Wait on Him instead and, along with me, let us learn the difference between the two.