“Lie To Me!” – A Delusional People 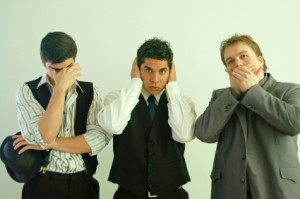 So here’s what I’m thinking these days: We simply cannot be as stupid of a people as we appear to be on the surface.  There has to be something more to what I’m seeing.  From the White House to the church house, from the urban ghetto to Hollywood mansion there seems to be a well anchored, unreasonable but visible resistance to the truth.  Surely it’s not because of an epidemic spread of ignorance and unintelligence? There has to be something more to it and I’m pretty sure that I’ve seized upon it cleanly.  We are not stupid people in America.  We are, more specifically, insanely foolish.  I am convinced that we have become people who simply do not want to know the truth, no matter the cost.  Our appetities for fiction and fantasy have allowed us to roam freely in our own privately crafted realities so long that, when facts and veracity knock upon the doors of our minds, we deadbolt those doors as quickly as possible and sit in silence until truth departs, assuming nobody is at home.  We have been deceived and both villain and victim is Us.

“An appalling and horrible thing has happened in the land: the prophets prophesy falsely,and the priests rule at their direction; my people love to have it so, but what will you do when the end comes?” – Jeremiah 5:30-31 {ESV}

Jeremiah was an Old Testament prophet to whom nobody paid attention.  He saw things with crystal clarity and told the truth to all his fellow Israelites.  The problem was that he was viewed as a nuisance because he had the audacity to relentlessly point out that the people lived with their heads in the sand so they eventually went to extreme measures to shut up ol’ Jerry the prophet.  My context for life is in the arena of Christian ministry.  I’m aware of what people are saying, thinking and doing in the name of Christ and I’m regularly stunned at some of the blatantly foolish things that Christians embrace.  False prophets didn’t cease in Jeremiah’s day and the people that love to follow them haven’t disappeared either.  Humans love to have their consciences eased, the egos stroked, the fears assuaged and their assumptions affirmed when it comes to God and His unfathomable ways.  Churches are often filled by people who have found themselves a personal prophet of their own who can tell them all that they already believed… and declare those believes to be valid.  After all, if the preacher agrees with me, how could I be mistaken?  In our churches today there are countless religious lemmings who say, “Lie to me!” They are a delusional people.

Exponentially increasing before our very eyes are the people who are committed to political delusions.  Never in the history of America have there been so many individuals who believe the sky is bright blue when, in truth, the sky is falling.  With a population of professional politicians in both parties at the steering wheel, Americans have been led to believe we are cruising freely down the Autobahn with the top down instead of recognizing the reality that we are in the ditch with two broken axles and an empty tank.  Based on recent reports concerning the murder of our ambassador in Libya we seem to believe that there’s no need to consider that savage Muslim terrorists hate us as Americans but, instead, we really acted offensively when an insensitive video forced the poor oppressed Mohammedans to stand their ground in protests that simply got out of hand.  It was mere coincidence that these homicidal protests occured on 9/11 and there is no need to think any further on the subject.  The White House issued formal statements and that should put an end to all discussion.  The current administration apologized for the horrible video that offended the Muslims and communicated sympathy to the people group that murdered our representative in Libya. Political blindness on both sides of the aisle is astounding and very few people are sounding a no-holds-barred alarm that this once God-blessed nation is perilously close to ruin.  The dumb masses latch onto promises by the government to take care of us so we need not trifle with taking ownership of our own lives.  Americans subsequently turn a blind eye to every ounce of evidence that clearly shows that we will sacrifice our individual freedom and national sovereignty in the process of turning ourselves over to the care of political representatives who worked a total of 150 days this year in session.  These loafaholics promise to have the wisdom and expertise to provide for our best interests???  “Lie to me!” Those who trust in Washington D.C. also are a delusional people.

So what’s my solution?  Well, it’s long and likely incomplete as I am not the man who can anticipate the depth of the mess that we are truly in here in the United States of America.  I can say this without hesitation, however:  until we become a people who once again regard the truth then there will remain zero hope of any kind of turnaround for us. Go back and read the verse above from Jeremiah concerning all the falsehood permeating the land in his day.  The part that should stick out is when God says, “My people love to have it so.”  That’s the average American and the average Christian today.  Jesus Christ said in John 8:32, “You will know the truth, and the truth will set you free.” But Christ is no longer en vogue so we prefer to give ourselves to the famous words of that Fleetwood Mac prophetess of the 1970’s, Christine McVie, “Tell me lies…Tell me sweet little lies.”

Except today’s lies aren’t so sweet.  And they will prove in the end to have not been little either.