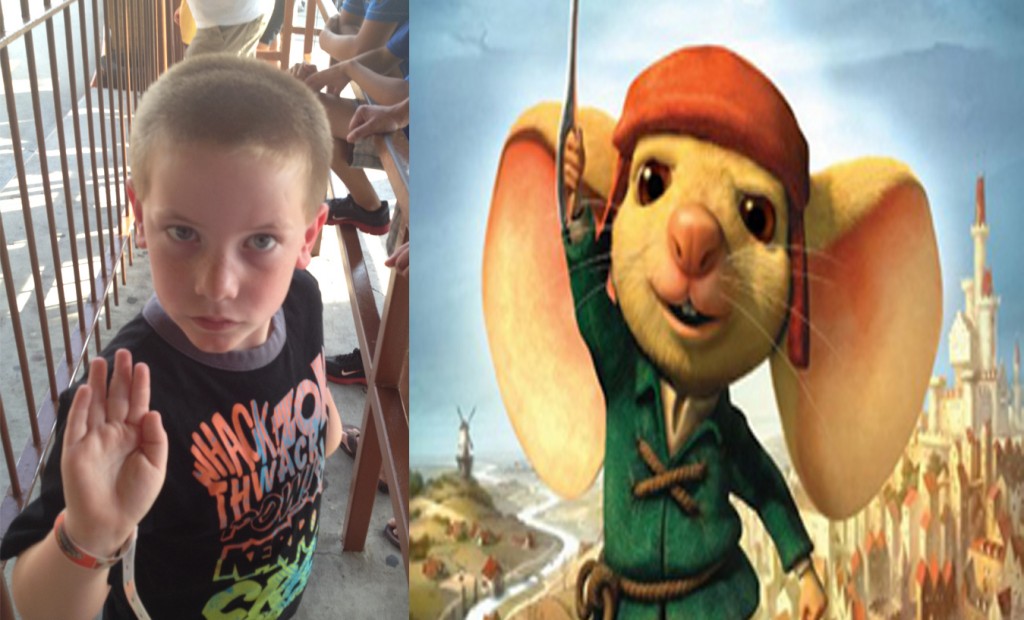 A few years back during Christmas-time our family made the trek to a local movie theater to enjoy the family-friendly animation titled The Tale Of Desperaux. I thoroughly enjoyed this tale of a little mouse who would become an unlikely hero and I’ve watched it more than once since we first saw it in the theater. Desperaux is a strange looking mouse with large ears and diminutive frame. His family and peers become increasingly alarmed when he does not seem inclined to be timid and fearful as all mice are expected to be. He is an anomaly in that the little fellow seems to know no fear whatsoever.  As a matter of fact, Desperaux has the heart of a lion while living with the strength of a rodent.  Eventually banished from the city of mice for being immune to fear, he finds himself in the hostile world of the rats that live in the dark basement of the King’s palace. I won’t rob you of the full storyline but suffice it to say that this little creature serves to inspire many by his willingness to eagerly do what he never should have been able to do. The little mouse had the courage of a knight and the decency of a gentleman. This is my kind of story because it reminds me of…well…me.  I will never forget something that happened that day in the theater as Amy and I sat with a much younger Alicia and Landon.  About two-thirds into the movie my then three-year-old son made his way down the row of chairs and put his nose two inches from his sister’s face:

“Aleeee-shaaa!” he repeated with renewed vigor.

“WHAT?!” big sister replied, a little too loudly for a crowded theater.

“I’m sorta tough, Alicia.” Having gotten his point across, he scrambled back to his un-buttered popcorn and oversized Sprite.

“Sorta tough”, he said.  Apparently someone else had been inspired by Desperaux’s onscreen courage.

Most of us fall somewhere between the overconfidence of a three year old who is eager to declare his toughness and the city of mice who believe it is only and always proper to cower, tremble and fear. I kind of like the philosophy of Desperaux, our little mouse-friend. Desperaux reminds us to go ahead and be aware of our limitations…but don’t be owned by them. We are fools to walk through the challenges of life believing that we are “sorta tough”. Yet equally foolish is the false humility/faith which believes that we are mice who were born to quake in the face of any adversity. The awareness of your weakness is part of the avenue to your inevitable and full strength. Mephibosheth (2 Samuel 9) knew he would never be a sprinter, yet he was graced to eat at the King’s table. Esther (chapter 8 of Esther) trembled at the risk of death when she approached her husband-king to intercede for her people yet she saved a generation of Jews from Haman’s holocaust. Peter was a sinker who walked side by side with Jesus on top of the waves. Jacob limped through the latter part of life…but he never limped alone. We are all made like Desperaux, small and limited. Yet we do not all respond as heartily the little mouse did. We believe in error that our inherent weaknesses get in the way of God’s potential use of us.  Many of us are learning that quite the opposite is true.

As the New Year approaches I discern that God will be acquainting many of us who believe we are “sorta tough” with the reality that we are mouse-like apart from Him. Don’t fret, it is not that we will become mouse-like, it is that we are already so when we operate independently of our great God. It is the realization of our weakness that so many fear. In coming to terms with this reality, nothing will change but our open awareness of who we really are. Apart from God we will either live with deceptive bravado or equally deceptive fear. They are opposite ends of the spectrum of carnality. It runs horizontally, by the way. What we need is to leap off of the horizontal and ascend the vertical – Jacob’s ladder, as it were. I can look forward to the divine whittling away that I sense is coming. I do not look forward to the pain of the whittling blade, but I crave the finished product. In the end, when the Master Craftsman lays down His blade, the sculpture will be the image of His dear Son in us. This is why we were put here in the first place.

Find this little movie if you can and watch it.  It is not only entertaining, it is instructive. Courage and forgiveness are major themes and, in the end, the rain refreshes, the sun shines again, and life regains its color. Perhaps we could use a little of the same in our lives.