Humor From The Vault

I thought we might need a good laugh to get the week rolling so I extracted a little humor from the blog.  This little nugget of gold comes to us from August 26, 2008.  Have a laugh at my expense and enjoy your Monday.  Check in tomorrow for something with a little more spiritual substance. – Jeff

Afflicted By A Pastry 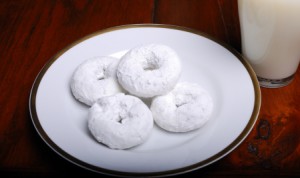 The Bible is true. I know this for a myriad of reasons but I learned it afresh yesterday to my own hurt. Remember this verse?

It proved itself to me yesterday. Let me explain.

If you read this blog regularly then you know that I am on a diet. Yes, I’m still on it and have lost around ten pounds (woo-hoo!). I still have another twenty to go (waaaahhhh!). Suffice it to say that I have not followed the diet perfectly. I have negotiated with myself to allow for the occasional morsel of delight in place of the dietician’s morsels of doom. Yesterday I came home from the office and discovered a beautiful sight to behold. Could it have been – yes, indeed, it was most certainly….a small bag of assorted doughnuts! These delicious donuts had been placed there in front of me as a delectable reward for my simply being me! How marvelous! How beautiful! How gracious of Amy to leave them their within my ravenous reach.

I ate four of them. That’s right, I exercised my free will and gobbled down four powdered plops of pastry pleasure.  So sue me.

Now mind you, I felt no guilt on the first one. It was perfectly permissible.

The second one came with a caution in my conscience which was quickly muted by the tidal wave of sugar coursing through my veins.

The third donut was justified because I felt that the previous two might need some company.  It has been said that donuts need a fair amount of company at all times (I think it was I who said that).

The fourth was eaten in spite of the flashing red light in my brain screaming that fat people aren’t supposed to eat a fourth donut on a Monday afternoon. It was here that I knew I had crossed the line.

Thirty minutes later I was casually conversing with Amy when the subject matter of the donuts arose. She may have noticed that the bag of treats was slightly emptied. I told her of my adventure – the glazed one, the chocolate one, and the two white powdered ones….

She began to smirk which she does not do too often. Something began to cringe within me.

“Tell me, I pray thee, goodwife…what pertaineth to the white powdered donuts?”

“They are Landon’s favorites.” she replied.

“Well then, I shall purchase the lad some extras on the morrow.” I declared, appeasing my conscience for having eaten my boy’s favorites.

“Because all he does is lick all the powder off of them and then put them back in the bag.”

I should not have eaten the donuts for two reasons:

1) I’m on a diet and fat people don’t eat a fourth donut on Monday afternoons.

2) They were previously licked to their own slimy glaze by a three year old boy who only enjoys the powder, but not the actual donut.

My sin found me out and I assume that there may have been some additional smirking going on at my expense in Heaven yesterday afternoon around 3:30.