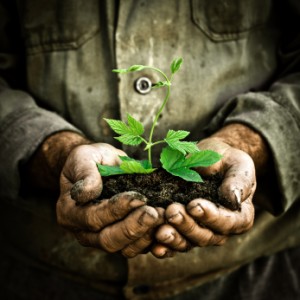 Last week, prior to Mother’s Day, I found myself doing what I don’t often do well: waiting.  There was some perfume I wanted to get my lady for Mother’s Day and I was told by the salesperson that the bottle could be engraved with a personal note to Amy for no extra charge.  They showed me some samples of the engraved bottles and I really thought it was a nice touch.  Over to the side of the sales counter was a little table where an elderly couple sat across from each other.  The wife was looking through a magnifying lens as she etched out someone’s words onto a pretty bottle.  She then passed the bottle to her husband across the table and he painstakingly rubbed her etchings with a chemical which made the words come alive with a golden color against the clear glass of the bottle.  I agreed to have Amy’s bottle engraved and, to my delight, they said it would take about 3-4 minutes to complete the task.  Free and quick – my kind of mall experience!

Twenty-five minutes and 274 impatient sighs later I saw the gentleman put the finishing touches on Amy’s bottle and he smiled with satisfaction as he presented it to me.  Eager to leave and get on with my day that had, at that point, been shortchanged about twenty minutes, I said to him, “Your wife certainly has some skills at being able to do this.  Thank you.”  He gave me what can only be called a “Santa Claus wink” as he replied, “It’s not skill, son.  It’s a gifting.”

Perhaps we should ponder the subtle difference between our confidence in our skills and our resting in God’s gifting.  I submit that sometimes these two things overlap and it is not always necessary to make a distinction between the two.  However, the older gentleman at the mall hit the nail on the head when he carefully corrected my thinking after I complimented his wife for a job well-done.  You see, if there is ever a time to clarify the difference between skill and gifting it is when praise is being given and received. The man’s reply to me implied that, on some personal level, he and his wife were unwilling to take sole credit for what she had just done.  Without speaking out of empty piety or false humility by way of denying that the work she rendered was skillful, he emphasized that something else was in the equation which needed to be recognized.  If there is a gift then there most certainly is a Gifter.  I’m ignorant of the man’s theology but I couldn’t shake the fact that something within him wanted to teach a younger man that it is inappropriate for a person to receive accolades for something he is not entirely worthy of.  At the mall last week, I saw a rare flash of humility in a context outside of church, Christianity or spiritual dialogue.  I saw a wise man endeavoring to clarify that he and his wife would not receive applause for something not entirely their own.  Sunday morning, during my own prayers for our Mother’s Day services at Meadow, God gently reminded me that this is something I need to purpose to retain.  It’s never to be my skills that I rest in…it must always be the Gifter who is my confidence.

Who is getting credit for the good things in you?  When you succeed is it because you are skilled in yourself or gifted by God for success?  If you serve in a fruitful place of ministry do you still take time to recognize that, apart from Christ, you can do nothing?  Some of you are blessed with musical ability; you’ve been trained, honed, used and grown over time – what is your attitude toward God’s blessing upon you and how do you view others who do not match your “talent”?  Others may have a picturesque home life and there might be a temptation to vaunt their personal commitment to God’s plan for the family as the reason for their exemplary home.  Could it be that it is more likely that God has chosen to grace the members of your family to work well together through your commitment but not because of it?  This principle applies to the business and financial worlds and successes enjoyed by some but denied to others.  Athletics and the arts are fertile ground for the temptation for pride in one’s own abilities as championships are pursued and names made known. I recall when NBA star, Lebron James, declared “I’ll be taking my skills to South Beach…” as he had his pick of what NBA team to play for.  He’s so ridiculously good at basketball that it is clear that his abilities are gifts, not merely skills.  For each of us, discipline and skill are necessary on some level for continued excellence but when they become the depository for applause, I believe humility and wisdom are at risk of being shoved aside.  Which is better: to be skilled or to be gifted?

Take some time today and think of an area of your life that has proved fruitful.  Tarry there for a bit and ask yourself if you are actively giving God the glory for gifting you in that thing.  Search your heart to diagnose if you might be in danger of giving lip service to His gifting while retaining smug confidence in your skills instead.  Let us not feign humility and say that we have no place where we are successful, but let us be convinced that our success is not our own.  Let’s humbly acknowledge the God of grace and generosity who gives us all things.  He’s the Gifter and we are the constant recipients.  Even the skills themselves are gifts from Him so why not determine today that He will receive the glory even in the smallest of things?

Amy won’t be the only one who carries the sweet scent from my time at the mall last week.  I think that God sprayed something on me too.  I’m enjoying the fragrance of His gifting and the reminder from an older man that it’s different than the smell of my skills.