Your Fragile Net Will Hold

With so many of us sequestered away from what once constituted our normal lives, I would like to share something that the Father has been speaking to me about in my own life. Let me share a word today about something many of us routinely battle: fragile nets.

“Simon Peter went aboard and hauled the net ashore, full of large fish, 153 of them. And although there were so many,the net was not torn.” – John 21:11

This verse is part of a larger passage that holds so many learning possibilities about obedience, trust, and the glory of Jesus.  While there is so much I would love to share from John 21 (I have not preached a message in a month!), I limit my thoughts to this one idea today: Jesus, the now risen Lord, was restoring His discouraged, aimless disciples back to Himself as He began calling them back into their assigned ministries which they had assumed were lost forever after they abandoned Him.

They had utterly failed Him as we all do at times, yet the Lord had plans for them that exceeded their present failures. For the third time after the resurrection Jesus was now appearing to them and, in this little scene, He had blessed them with an incredible haul of fish after they had spent the whole night catching nothing. John is writing about this, and he makes the point of telling us that 153 fish were in the net…and that the net held every one of them.  We do well to assume that John included the footnote about the net’s endurance because 153 fish would put quite a strain on the average fisherman’s net. Matthew’s & Mark’s gospel accounts both tell us that fishermen of that day had the responsibility of mending their nets after taking in a catch (Matthew 4:21; Mark 1:19).  It would not be strange if catching lots of fish put stress on the seafarer’s nets, even to the point of splitting them.  This particular haul from Jesus was a miraculous bounty that the disciples were blessed with and, where Jesus provides the fish, He overcomes the fragility. 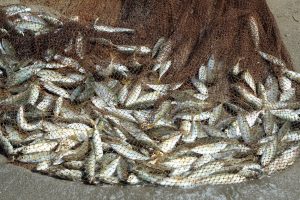 He’s filling your net, you know. You may assume because of fears, weaknesses, past disobediences, or present disconnectedness, that your days of partnering with the Master in fulness are over. You would be wrong, because He is immeasurably greater than your greatest thoughts about Him. You do not follow an indifferent Savior who could not care less about what you bring to shore with your life. He intends to bless us in ways that we occasionally fall pitifully short of comprehending. So often we feel only the weight of what He allows into our life’s net, and we wonder if there is any way we will be able to enjoy it if we arrive back on solid ground at the safety of the shore again.

Waves batter us while we chart out waters.

Storms blow in regularly and cause us to wonder if this is the day that we will sink.

Then there is also the disturbing awareness that sometimes we sense the Lord is safely on the shore while we fear running adrift, alone at sea.

When these things pass and we have been called to come inland, we might do so with the concern of whether or not our nets will hold – they have been filled by Him and can feel so burdensome. We wonder, “Does Jesus really think that I can carry all of this?  Because it’s all from Him I know it is good, and I know it is meant to become a blessing but…right now…it just feels too heavy.”  You have been there, right?  Maybe you are right there today. Jesus tells us, as He told Peter, to bring to Him what is in the net, and it is only then that we learn that the weight of the appointed catch is completely supported by the net which holds it.

What He appoints you to catch, He’ll empower you to carry.  Your net is holding.

Beloved, let’s resist the urge to ask for lighter loads.  My impulse is to request exactly that when I’m certain that the cords of my own power are becoming threadbare. Take a little of this from me, God.  Reduce my stress here, Lord. Lighten my load, Holy Spirit! Have some other disciple carry my net, Jesus. We get tired, we then we get confused, and then we grow weary, and then we misunderstand what is in the net.  Blessings come in heavy loads sometimes, maybe even most of the time.  Let us trust that, when we become aware of those types of days finding us, that God has ordained the perfect strength to endure and to eventually overcome.  Your life in Him is secure and strengthened; yet we must remember that His strength is made perfect through our weakness (2 Cor. 12:9), and there will always need to be our awareness of both dynamics working together.  In the end, Peter and Jesus shared a meal together during which the Lord restored Peter to higher purpose (John 21:15-19). Jesus had sovereignly ordained that fruitless night of the disciples catching nothing so they would not rely any longer upon their own strength. He then ordained the miraculous catch of fish so they would remember that He can instantly bring something amazing out of our nothingness.  He then ordained that the heavy weight would be fully contained and safely delivered at His resurrected feet.

Their net held everything that Jesus put into it.  So will yours.