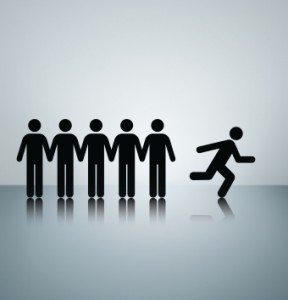 The time of year is quickly approaching where we have the potential to see an array of different types of weather.  I am reminded of the volatile tornadoes that ripped through Alabama and Georgia last year, wreaking havoc while bringing death and destruction.  Homes were leveled, lives uprooted, and unprepared people slipped out into eternity without the second chance they had presumed upon.  I am always amazed at the newscasts which introduce us to people who make their homes on the coastlines of the southeastern United States where powerful storms frequent the Spring and Summer seasons.  When the warnings of an approaching hurricane are given, zealous television reporters will descend upon coastal towns to report on the evacuations which take place on the advice of the experts and authorities.  Invariably, there is at least one interview with a grizzled resident who refuses to leave his or her home, possessions and familiar surroundings in spite of the call to evacuate.  They cite their triumph over past storms through which they escaped unscathed.  Sometimes they will accuse others of overreacting who flee the storm’s path, believing themselves that this storm will be nothing that they cannot handle; even more sensationally, there are the occasional few who will face the hurricane simply for the thrill of seeing its power and experiencing the excitement that its danger brings – Grab your surfboard dude, monster waves are comin’! Sadly, others simply have absolutely nothing to lose, so they remain in fatalistic abandon waiting to see what the storm will bring.

Depending on the intensity of the storm, the coastal city’s location, and the timing of the hurricane some residents make it through with little or no harm…but some do not.

The same mindset of the storm challengers resides in many people in the Body of Christ.  This storm is not of a meteorological nature, but a spiritual one.  It is not a hurricane which is approaching but a temptation which is approaching, bringing with it the power to deliver great damage, ensure destruction, and ruin lives.  The Holy Spirit broadcasts its path of approach, members of the body of Christ report its danger, and individual Christians receive the news that this temptation is leaving ruin in its wake – and-  watch out – it’s heading their way eventually.  Some who refuse to risk their walk with Christ, their Christian testimony with man and the welfare of their families will abandon everything to escape temptation’s course.  These are no spiritual storm chasers because they’ve seen more than once what can happen when you roll the dice to see if you can handle “the big one”.  They may miss out on some creature comforts, some opportunities for short lived pleasure, some fleeting, forbidden delight but they will escape temptation with what is most important: the integrity of their heart and the favor of God.  In contrast, those who are too confident in their own abilities will seek to embrace the temptation, being deceived that its affects will not be too overwhelming, will not bring too much destruction, will not cost them more than they can afford to rebuild.  Still others view the fleeing of the temptation as an act of cowardice – after all, are we not insured against total destruction by the grace of God? Shamefully, there are those who profess Christ who not only refuse to run from temptation, but welcome it so that they might once again feel the thrill that accompanies it and briefly fill their empty lives as they disregard the damage that inevitable ensues.

Temptation finds us all and finds us often yet temptation itself is not a sin.  Whether sin does or does not result from temptation hinges on our preparation against it and decisive response to it.  Remember that our eventual reaction to it depends on our committed preparedness for its arrival.  Our preparedness for it depends on our attitude towards it –  so what is your attitude toward the thing which serves to regularly tempt you and trip you up?  Friends, seasonal storms will come but we need not tremble.  We are not often called to brave the storm and there is no shame in hitting the road and running the opposite direction. One of the most incredible acts of spiritual fortitude you can embrace is the decision to evacuate all provision for your flesh to fail.  A strong shelter is Christ.  A safe harbor is humility.  A high tower is the grace of our God.  Hide yourself in these protective places and no stormy temptation need ever take you again.