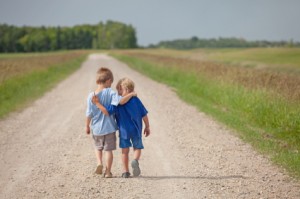 What’s the longest time period you have ever allowed yourself to remain discouraged?  Some people are naturally upbeat, positive thinkers, glass-half-full types of folks.  Others have to work hard at maintaining a grasp on the positive, affirming and hopeful.  I was talking with a man some time back and noted that he had a negative slant on just about everything so I provoked him a little and asked, “Are you a glass-half-full or glass-half-empty type of person?” He replied in soggy defeatism, “Neither.  Shattered glass can’t hold nothin’.” How do we fight against becoming that person?

“Let us but feel that He has His heart set upon us, that He is watching us from those heavens with tender interest, that He is following us day by day as a mother follows her babe in his first attempt to walk alone, that He has set His love upon us, and in spite of ourselves is working out for us His higher will and blessing, as far as we will let Him – and then nothing can discourage us.” – A.B. Simpson

Spending the last several years as part of a community that centers itself in 24/7 prayer has radically impacted who I am and how I think of the Kingdom of God.  Frankly, it has marked me with a much deeper level of optimism and hope in my spirit. Don’t get me wrong, we are down in the trenches in these prayer meetings fighting against all that is contrary to the Kingdom, while also approaching God in both unbridled worship and sobered confession with repentance as a community of believers.  Our prayer gatherings are not primarily designed to be soft and cushioned but, rather, purposeful, pinpointed and productive.  In spite of the intensity of our aims in intercession, I will gladly confess that I almost always leaving the prayer room each extremely encouraged.  Listening to the prayers of people that I rarely get to spend quality time with frequently reminds me that our oneness in Christ and God’s mighty grace defines and unites us for eternity.  This week I’ve been in groups that have included a Nigerian pastor, a former addict and criminal, people delivered from the bondages of heterosexual and homosexual sin, a successful businessman longing for his own heart to be holy, a divorced woman whose former spouse abused her physically and mentally, multiple missionaries who are laying everything down to advance the Gospel, a single woman in her thirties trying to find her place in the Kingdom, a committed Calvinist in his sixties with a sharp mind and gentle heart, and a young man still finding his way doctrinally and hoping one day to begin seminary.  With all this diversity one might think that the prayer times must have been awkward at best and chaotic at worst.  Far from it. We’ve wept, rejoiced, thundered and sat silently as God ministered to us and through us.  In the end we say our goodbyes and look forward to doing it all over again the next time. We then get into our cars to go home…usually in a deepened state of encouragement.

My aim for today is to not minimize what God might be doing in another’s life.  Help me, Lord, to be a consummate listener to those around me each day. Empower those who read this post today to take the baton of encouragement and pass it to another who is running this race.  May we, in the midst of a culture teeming with trouble, learn to stop asking a defeated “But, how?” and begin to declare “Why not!?”  Prayer is the incubator of holy confidence. Consistent prayer is the birthing room of vision and breakthrough. Fears burn up on an altar of prayer that stays hot. I have never been able to worry and pray at the same time, as long as I am willing to pray until my worry dies. Encouragement comes in the presence of God, and I’m unsure if anything manifests the presence of God more so than intentional prayer released before His throne by faith. Is it any wonder why the enemy of our souls fights to extinguish our prayer lives more than he fights against anything else?

Let each of us who name the name of Jesus Christ expect great things from God, from ourselves and from others.  It is not that God is not lighting fires these days in hearts, it is that we know more easily how to douse the flames instead of fanning them.  It takes a big-heart to refuse to be controlled by the potential of what is negative.  It takes a bigger-heart to commit to not be used of the enemy to resist the big-heartedness in others around us.  The ministry of encouragement is biblical, fruitful, powerful and NEEDFUL.  But we have to possess it ourselves before we can release it to others. Sometimes today’s encouragement is what will make the difference for years to come in the life of another.  Consider that it might very well be the somebody that God will place in your presence today.  Maybe your words of hope, edification, love, forgiveness, affirmation or exhortation are going to be the difference-maker in their lives.  You might very well be used of God to help liberate someone from the lingering clouds of their internal gloom.  Holy Spirit, please help us to be thoughtful when communicating with others – let us truly think about what we say and the impact our next words will contain.  I even pray that we might hesitate to speak into the lives of others until we are rested in the confidence that you have first spoken into our own lives. My bible reminds me today, “To make an apt answer is a joy to a man, and a word in season, how good it is!” (Proverbs 15:23)

Water that person next to you today…it’s their Springtime and God has made them to bloom.