Chicken Sandwiches, The ACLU & An Assorted Host Of Morons 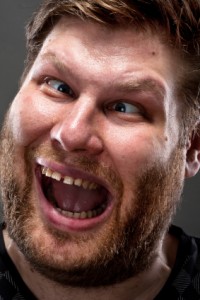 It’s a sad day in America when the ACLU is the voice of reason among us.  I’ve been reluctant to say too much about the “Controversy-Fil-A” issue that has become the latest American drama that shouldn’t be.  If you live outside the States or haven’t extracted your head from the sand in the last ten days, here’s what’s happening:  Dan Cathy, Chief Operating Officer of Chick-Fil-A restaurants, was being interviewed by a Christian media outlet when he shared his commitment to the biblical definition of marriage being between a man and a woman.  He remarked further that it would be the height of folly to shake a fist in the face of God and invite judgement for abandoning God’s definition of marriage as revealed in Scripture.  Upon these remarks being made public, all stupidity broke loose in our country and we’ve all spent a week or so posturing around what should be a no-brainer issue.

“Extra, extra-  read all about it.  A Christian believes his Bible and dared to tell somebody!”

I don’t plan to delve into the clear position in Scripture concerning homosexuality, adultery, fornication or marriage.  I’ll leave that to those with more time and a higher threshold for rehashing elementary issues of biblical teaching.  Suffice it to say that an impartial pair of eyes and an honest mind will come away from the bible seeing clearly that homosexuality is defined as sin and marriage is regarded by God as a commitment between a man and a woman.  I’m not saying that you are forced to agree with this view but I am saying it is an easily discerned issue when one reads one’s Bible.  What I would like to address is the fact that, in America, tolerance applies to every single sector of society but the Bible believing Christian.  Those who would otherwise ascribe legitimacy to most anything in our culture will look a Christian (or all Christians) in the eyes and point a threatening finger at us, daring us to speak our minds against the world-wide group hug that promotes same-sex unions.  To disagree with the attempt to legitimize same sex unions is immediately ratcheted up to the status of living as a hate-monger.  To speak out against it makes one an intolerant bigot.  To refuse to recant makes one an enemy of the state.  We saw in the backwash of Cathy’s statements going public a host of political figures situate themselves to do anything to impede the growth of Chick-Fil-A as a business simply because one of its executives dared to speak his convictions concerning what the Bible says about marriage.  Boston Mayor, Thomas Menino, along with Chicago Mayor, Rahm Emmanuel, immediately came out to make statements indicating a desire to ban the restaurant from their respective cities.  In a country where unemployment is a significant issue, these two mayors have expressed a leaning toward keeping jobs out of their cities in new Chick-Fil-A restaurants because of the personal Christian convictions of one of the company’s executives.  The ACLU, a fairly despicable entity, was somewhat forced to speak to this issue.  I will give them credit that they seem to be consistent in defending the liberties of all segments of our nations populace even when they might be loathe to do so on behalf of a conservative Christian.  Here’s what they contributed to this fast-food-free-for-all: “The government can regulate discrimination in employment or against customers, but what the government cannot do is to punish someone for their words,” Adam Schwartz, senior attorney for the American Civil Liberties Union of Illinois, told Fox News. “When an alderman refuses to allow a business to open because its owner has expressed a viewpoint the government disagrees with, the government is practicing viewpoint discrimination.”

Has anyone else noticed that tolerance applies to most every group except the one group who believes in absolute truths, objective moral standards, the authority of God’s Word and an eventual day of reckoning for all of mankind before their Creator?  Here’s a thought I had a few days ago that I’ll close with today:  Tolerance used to mean that we chose to accept that others thought differently than we do and determined we could live with it as they lived with the fact that our views differed from theirs. Something has clearly shifted in America concerning tolerance.  The new version of tolerance requires us to accept, approve and applaud the views of those with whom we disagree. We are no longer being asked to cooperate as Americans with those who hold different views than ours.  We are now required to keep silent concerning our own views if they go against the mainstream, liberal views of this crumbling culture.  Speak against the policies of the President and you are immediately classified as a racist.  Give commentary on the decadent sexuality of mainstream America and you are relegated to the status of an out-of-touch, narrow minded prude.  We must tolerate them – nay, applaud and promote them.  We are also required to expect harsh repercussions if we dare to oppose them.  You see, the old tolerance, at worst, shrugged a shoulder and shook the head as it disagreed with the other side of the aisle. The new tolerance grabs the throat, goes for the jugular and says, “How dare you raise an objection.  Don’t you know we are a tolerant society.”

I’m getting on the bandwagon tomorrow and heading to Chick Fil A for lunch or breakfast.  Not because this is the best way for me to support my own biblically defined view of marriage, but because I am sick of left-winged, intolerant, presumptuous, arrogant, persecutory morons demanding us to keep out mouths shut.  I’m opening mine and filling it with a Chicken Sandwich, Waffle Fries and Dr. Pepper.  I’ve now said my piece.