I remember clearly that morning.  Leaving work in a raggedy, low-rider truck I made my way out of the parking lot of my workplace.  I turned right and drove a quarter of a mile 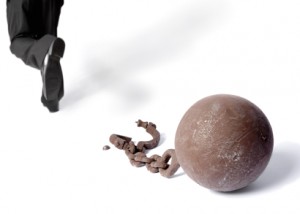 with trembling hands guiding the steering wheel.  I made another right turn and continued about 200 yards before turning left into the parking lot of my apartment complex.  By then I was beginning to cry.  I put the key in the door, walked in, locked the door behind me and continued through the doorway into my bedroom.  So completely weighted with the sense of my sin, I crumbled to the floor where I sobbed out my repentance before a Holy God from whom I had been running all my life.  Rising to my knees a few minutes later I crawled into bed and slept the deep sleep of a forgiven soul for the first time in my twenty four years on earth.  It was Thursday, August 4th 1994.

“Salvation belongs to the Lord; Your blessing be on Your people!” – Psalm 3:8 {ESV}

I never weary of telling people about that great day.  It was the beginning of life for me and to be reborn through faith in Jesus Christ became an unspeakable joy.  Having no theological clue as to what had really occurred, I began to note that dramatic changes were manifesting in my thinking.  It was a surreal experience to be able to note that I was different inside and the obsessions and compulsions which had owned me for so long had lost their power.  One thing that had not changed however was a strong sense of guilt.  Though I sensed that God had done something incredible on my behalf, guilt was still with me in full-force and I erroneously sought to rid myself of it by doing good things.  Somehow I believed that “doing good things” would alleviate my guilty conscience. Inevitably I could never do good enough and, when I did something sinful, I would be devastated; there would be weeks that I would spend several days in a row in a self-imposed exile from God, quiet, afraid, prayerless.  I was set free from the penalty of my guilt but still struggling with what to do about the sin I found to be within me.  This battle would rage for years, resulting in various forms of legalism and undeniable pride as I took my security in “being and doing good” instead of the immeasurable grace of a continually saving God.  As the years went by God mercifully separated me from this misery.  As I had given up my sin to Him on that day in August I now had to give over my righteousness to Him.  Ultimately, I could cling to nothing but who He had made me to be in Christ.  Having to face the hardcore fact that I was not fully righteous, I abandoned my attempts to justify myself through my performance.  Quite honestly, this was harder to accomplish than my intial repentance from darkness to light.  In the end, God’s grace empowered both decisions and I write this morning as a man set free from his sin…and from himself.

Keep traveling, fellow-pilgrim.  We all know that you are not yet what you could be.  God is working all of that out.  I think if you will continue to humble yourself before Him then you will continue to hear His guiding voice.  Go on hating your sin and shortcomings – that’s healthy.  However, don’t spend a moment despairing over them because He has decreed a day wherein you will be finally and fully free.  He will have to accomplish that on your behalf.  Why? Because His is the kingdom, the glory and the power…forever.

That’s really good news for me, seventeen years after the journey began.