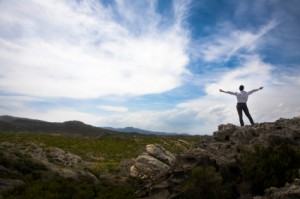 Several weeks ago I was speaking on the phone with the man who led me to Christ in the early 1990’s.  Scott Johnson was preparing to lead some in his church on a missions trip to South America and had mentioned that he was praying about giving his wife his own ticket so that she could be a part of their annual ministry in Honduras while he stayed behind.  When I asked if he really had no qualms about sending his wife so far away without his protection of her, Scott answered as only he can answer when he said, “Yeah.  We serve a big God.”

That was the end of that part of the discussion.  Scott reminded me that God was fully able to be God to his family even if some of them were in Honduras. I felt somewhat silly for having asked the question but was grateful for the blunt-object reminder from my spiritual father that we should seek to retain our big-God theology.  Isaiah’s prophecy says it this way,

As most of you will gather with the saints in local church-houses today, by all means let us remember the astounding might of God.  He has always been the biggest, the strongest, the wisest, the most loving, the most merciful, and the most gracious.  He has not diminished in His nature like we do as time passes; God is above time and the creator of it, therefore it has no impact upon Him.  His love for His own has not weakened, though we often be a sinful lot.  God’s plan for the ages has not been reduced to a trickle but remains as forceful and effective as He determined it to be in eternity past – as it began, so shall it complete.  What about your own life? Well, God has no perplexity about what is occurring in you, over you, through you or around you.  Dear friend, you are as secure in Christ as you have ever been and not a single shred of earthly experience will strengthen nor reduce His plan for you.  Your enemy, Satan, should be trembling with the same dread that he had when he first learned of his eternal doom in ages past because it is as sure today as it was when first decreed.  The great God of Heaven is still able to save the most vile of earth.  That loved one that seems so hopeless to you is no match against electing grace which chooses, pursues, calls and captures.  God’s might can pour down in an instant refreshing waters of the Spirit upon those who live in the built up dust of spiritual apathy.  The 21st century church is not what she should be and God’s eye of omniscience has not grown dim to this, yet He is as marvelously committed to us as He was in the first century.  He is still the healer who ordains the miraculous and brings it to pass.  He is still the provider who cannot forsake the righteous.  He is still the grand vindicator who has promised that those who oppose you will undeniably recognize the truth about you when the scales are finally balanced.  Let us commit never to live in such an insulting way that motivates us to sing and preach of His greatness but fail to live in that certainty.  This mighty God of Heaven drew me up out of the pit and washed off my filth with such redeeming force that no sin will ever adhere to me again.  He has declared through sovereign grace that I stand as righteous as His only begotten Son before Him.  Hallelujah, I am not merely tolerated by Him but, rather, lavished with welcoming love!  God is not content to be good only in Himself or unto Himself.  He is so good that He cannot bear not to share it with the objects of His affection.  He wants you to taste and see this truth and be forever changed.  This is only a fraction of who He is and it is enough to leave us stunned for all of time and eternity if we will but fully give ourselves to it.

Yes, Scott, you are right.  Our God is big. Thanks for the not-so-subtle reminder.