Back & Forth Across The Line 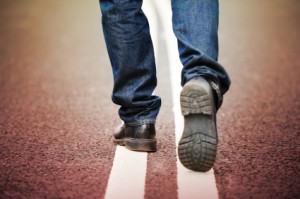 Occasionally God just has to show us His greatness.  Every now and again we forget His glory, His awe, His power and it is then that we cease to appropriately tremble in the presence of the Almighty.  You have likely experienced the greatness of God’s merciful rescue in your life.  I hope that you have been made to know the scope of His power, the riches of His grace, the breadth of His compassion and His inexplicable love for unworthy sinners.  In this flow of His grace to us it can be said that God is great and most of us think of His mighty favor on our behalf when we praise Him for His greatness.  Read the verse below and you will be surprised to learn that it was spoken right before God was about to display His displeasure with His own people in a very dramatic and humbling manner.

“Now therefore stand still and see this great thing that the Lord will do before your eyes.” – 1 Samuel 12:16 {ESV}

How could God doing something great be anything but positive news?  Well, it wasn’t great as in being beneficial, it was great as in being stunning, shocking and stupefying.  Samuel was speaking to a hard-headed, stiffnecked group of Israelites who demanded a human king to rule over them in the stead of their God.  He recounted to them how God had been faithful to lead them, protect them, defend them and prosper them without the usage of a human king.  Yet, when the people witnessed an impressive king who reigned over a neighboring pagan territory, they began to desire to keep up with the Joneses and politely asked the Sovereign Creator to step aside in favor of someone they could gaze upon and parade before the eyes of others.  Samuel, following the guidance of God delivered these words to them:

After these words, Samuel told them to stand still and get a load of what was about to happen; Samuel called upon the Lord to send a thunderstorm and declared to the people that God would oblige him with this sign in order to prove to them that their request for a human king was sinful and faithless.  When the skies cracked with lighting and the ground shuddered at the thunder and the torrents descended from above…the people understood that they were on the wrong side of a line they should have never crossed.  They cried and plead with Samuel to intercede on their behalf and beg God not to bring them to a premature end.  It is here that Samuel shares something that all of us would do well to remember when we sin, when we cross our own line:

“And Samuel said to the people, “Do not be afraid; you have done all this evil. Yet do not turn aside from following the Lord, but serve the Lord with all your heart.  And do not turn aside after empty things that cannot profit or deliver, for they are empty.  For the Lord will not forsake his people, for his great name’s sake, because it has pleased the Lord to make you a people for himself.” – 1 Samuel 12:20-22 {ESV}

For every one of God’s children, for every time we cross a boundary…there is something much more powerful than the reality of our rebellion.  What is it, you ask? The reality of His redemption!  God’s counsel to us when we prove our foolishness in our deeds is for us to not walk in lingering dread of Him.  Provided we have acknowledged our sin and turned from it, we may immediately turn to Him wholeheartedly and cast ourselves upon His lavish mercy.  Confess without reservation where you have erred and then pray with all confidence that the blood of Jesus Christ has cleansed you from all manner of sin (1 John 1:7).  As you do so, employ upright discernment for your future and turn away from empty things that will never profit you – like a fallible human king to rule your life – and bow down before the faithful Monarch who has never swerved in His commitment to you.  Jesus Christ will not, cannot, forsake you – all input which says otherwise is carried to your ears on the crumbling edges of deceit.  Christ is pleased in making you His own and will not cast off those whom He bled to bring near.  No single act of heinous sin, no multiplying heaps of transgressions, no depth of darkness chosen in a moment can undo what your Redeemer has planned on your behalf before the foundation of the world.  You, my friend, cannot cross the line forever.  Live out today within the boundary of where you will live out eternity.  Live with Him.  Live in Him.  Live for Him.

And watch the great thing that the Lord will do.