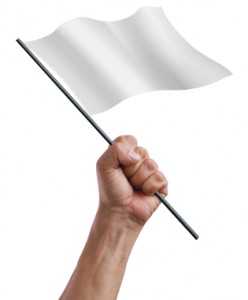 For those of you who live outside the United States and may not be tuned in to the political climate here, it is needful for me to inform you that this is an election year.  In November the American public will vote for the man who will lead our country as President of the United States and right now we are in the final stages of learning who will run in opposition to President Obama.  All indications point toward it being a man named Mitt Romney, but it is still not official.  Why, with merely 7 months left before the election, do we not know who will run against Mr. Obama?  Because we have three other men currently running against Mitt Romney who simply will not bow out of the race.  They do not discern the time of appropriate surrender.

Calling it quits is not an easy thing to do for some of us.  I’m a natural fighter and I love a challenge; when I believe I’m in the right I have a hard time walking away from the contest of the moment.  In our political climate in America, I believe the three remaining men should humbly step aside even though they are fundamentally opposed to what Mitt Romney stands for.  Rick Santorum, Newt Gingrich and Ron Paul are all principled men who have invested much time and money as they seek the Republican nomination but it is clear that the American public has chosen Romney as their choice to run against President Obama.  It’s time to take one for the team as they step back into the shadows and let their rival take the process from here.  This type of humility doesn’t always come easy to people who are decisive, principled and fueled by convictions.  Yet, sometimes humility calls us to step aside and let another move forward in our place.  Scripture says so much about humility that I have come to the conclusion that it is the essential in relationships, surpassed only by love.  God gives grace to the humble.  God resists the proud.  God exalts the humble and brings down the haughty. Headstrong ways can be beneficial at times but it is a precarious thing to remain resolute without becoming self-serving when it becomes clear that God’s desire is for you to become little while someone you disagree with becomes stronger.

Today, someone is likely going to win in the same stadium of your loss.  My counsel is for you to protect and retain your integrity; be patient as God works His deeper plan through the discouragement of your needing to take one for the team.  If it’s in your home where a little tension has arisen, let the other have his or her own way if it allows for purified peace to resume.  Maybe somebody at the workplace is a constant source of aggravation to you and you’ve been matching their flesh with a pound of your own – would it not be wise to let it go?  You’re not part of a church-fight are you? Has anything pleasing to God ever arisen from the sawdust of sustained selfishness in our churches?  Let it go, saints! Sometimes we can be 100% accurate but still not be right; sometimes there is a higher pathway that God wants us to choose and its direction is downward.  Master the art of bowing and you will find the character of Christ being galvanized in you in ways you have never before sensed.  Truly, in this sense, down is up and up is down.