“…to give them a beautiful headdress instead of ashes, the oil of gladness instead of mourning, the garment of praise instead of a faint spirit; that they may be called oaks of righteousness, the planting of the Lord, that he may be glorified.” – Isaiah 61:3 {ESV} 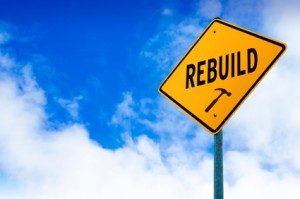 There’s not much that is worthy of our time and attention on the television these days.  Taking care of Amy has quadrupled my hours in our home during the week and I’ve had more than my fill of Fox News and ESPN.  I admit to enjoying watching the Braves and the Hawks when their seasons are in full force – sports can be a good release from the intensities of life.  There are also a handful of shows on some of the educational stations that tickle me fancy.  I’ve found recently that these shows about restoring old antiques from the scrap pile hold my interest fairly well.  American Pickers, along with American Restoration have as their main characters quirky fellows who spend time, travel, energy and money in bringing back discarded pieces of junk to their intended glory.

I like it because I believe, subconsciously, it reinforces what God has done for me.

Isaiah had the sad task of telling proud Israel that God was going to be bringing down their nation through an invading army from the north.  They would be mightily defeated and taken away captive.  As bad as things would get, however, God would not allow them to be perpetually ruined.  He would bring them back.  He would retrieve them from the heap.  He would establish them once again as a people intended for His glory and their frightening season in the night would give way to brilliant glory.  You see, God is the expert at reclaiming the discarded, broken, defiled and dead for the sole purpose of putting His amazing strength on display.  He continues to do this each and every time He saves a lost sinner like you and me.

Today we have been anointed with the oil of gladness where there once was thick mourning; as Christians we are attired with the garment of praise which overrides our once faint spirit.  God has made us to be called oaks of righteousness, the planting of the Lord, so that, through our restored souls, He may be greatly glorified.  Yes, you are a reborn object for God’s great glory in your generation.  What He promised to do for Israel He clearly does to us through Christ.  My choice is whether or not to believe, and thus appropriate, this beautiful truth for myself: sought out, found, retrieved, reborn, cleansed, commissioned and beloved.  Christ did that for me.  He did that for you too.

Good news this Tuesday: I’ve been overhauled.  I reckon I’ll walk in that truth today.