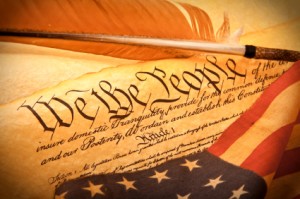 wonder if I’m presuming that my particular candidate will win and, therefore, exhaled satisfaction will be experienced.  That would be nice but that’s not what I’m alluding to.  My and Amy’s relief will come because we will then be free from watching the incessant flow of campaign commercials on the TV as we will also be liberated from the yard signs, the talk radio rhetoric and the political chatterboxing which will have predominated the American landscape for over a year by that point.  I’m looking forward to the end of the elections and we don’t even know the two people who will be challenging each other for what has histroically been the most powerful position in the world.  One of those candidates is in a little hot water this week because of something she said.  Michele Bachmann said this in a recent gathering,

“I don’t know how much God has to do to get the attention of the politicians. We’ve had an earthquake; we’ve had a hurricane. He said, Are you going to start listening to Me here?”  Great fodder for pulpit time, Mrs. Bachmann…not too wise for a presidential candidate in the increasingly secularized USA.

I’m not a politician so I can approach my thoughts this morning without worrying if I’ll offend the sensitivities of the American populace.  Here’s my thought:  she said it, she was criticized for it, and she had one of her staffers send out an official statement saying that she was merely jesting when she made the comment.  She didn’t lose points with me because she said something “religious” in a political setting.  Mrs. Bachmann has publicly declared her Christianity and I would expect that if her faith is genuine it will flavor all of her words and actions to some degree.  The reason she dipped lower in my esteem is because she subsequently lied and said she was joking.  She bowed to the pressure of the fickle American popularity poll.  I’m hoping for a candidate with some steel in her spine.

Michele, if I may be so bold…you weren’t joking at all.  In the core of your heart you believe that God is sending a wake up call to our nation.  You know that there is biblical precedent for God utilizing nature as His personal messenger to declare His disapproval of man’s ways.  He has used floods and droughts to get His point across.  God has darkened the sky and split bodies of water.  Earthquakes have been in His arsenal for quite some time now.  As a Christian familiar with her bible, Mrs. Bachmann would be educated in the book of Revelation which describes unprecedented chaos in the earth, sky and seas which are yet to come.  Jesus Christ said that upheavals in the natural order would increase in frequency and intensity before His second advent.  The fact of the matter is that God controls nature and the celestial, terrestrial and aquatic are His to utilize to show us His smile or His frown.

May God so empower us as the followers of Christ that we don’t have to bow to the pressure to backtrack from our bibles.  We believe in the Genesis creation account – let society get over their frustration with us for that.  We hold to the truth of the virgin birth of Jesus.  We believe in His sinless perfection and His substitutionary death for our sins.  We don’t apologize for our confidence in His physical resurrection and His bodily ascension.  I’m not ashamed that the driving force in my life is that I am eagerly anticipating His coming again.  Yes, I am a died-in-the-wool Bible believer and feel absolutely no need to shy away from this.  By the way, that’s the reason you will never see me giving a state of the union address on the major television networks.  America doesn’t want a man or woman of deep rooted Christian certainty leading this nation.  We are a people of shifting convictions, situational ethics, tolerance run amock and disgusted with dogmatics.  Americans want someone who believes in everything so we might continue in our effort to stand for nothing.  We are not above history and, quite frankly, we are in far too deep of a national sleep to be aroused by a divinely dispatched earthquake or flood.  We might be awakened but we will certainly not get out of the comfy bed of individual sovereignty.  The nation is beyond the point of no return when it comes to honoring our Creator… but you don’t have to be.  Be the person you were re-born to be.  Live for the One who gave you life.  Speak the truth into the dark depths of deceit and don’t apologize or retreat when it is not well received.  Here’s what seems like a silly (but wholly necessary) prayer that we might offer today: